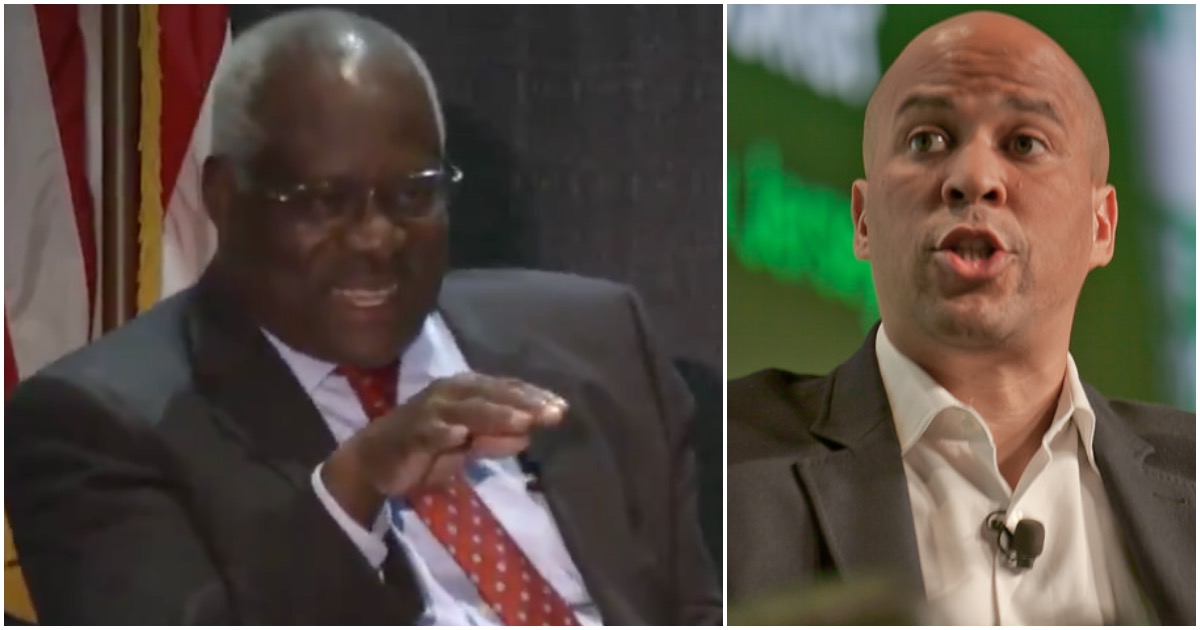 As a constitutional originalist, SCOTUS Justice Clarence Thomas doesn’t have time for the shenanigans that surrounded the Brett Kavanaugh hearings.

During an interview on C-SPAN, Thomas took a shot at New Jersey Sen. Cory Booker (D), who recently referred to himself as “Spartacus.”

The crowd loved it.

[…] one of the biggest burns of Booker came from sitting Supreme Court Justice Clarence Thomas. Speaking with the Federalist Society, Justice Thomas was asked about the general politicization of the court by politicians and preserving the “legitimacy” of the court.

Thomas scoffed at the question, saying that justices need to be “honest,” and “follow the law.” Thomas then said that the word “honorable” needs to be used more in relation to those in public life. Thomas said “Honorable – if we could use that word about more people who are in public life, people who actually ask the questions at confirmation hearings, instead of ‘Spartacus’…”

From last week, Justice Clarence Thomas: "Honorable – if we could use that word about more people who are in public life, people who actually ask the questions at confirmation hearings, instead of 'Spartacus'…"

Sen Booker wasn’t having a ‘Spartacus’ moment, but merely ‘Jumping the Shark’! He knew his purportedly classified documents he wanted to sacrifice his career for by revealing to the Public, were declassified. The ad writes itself, “Sen ‘Fonzie’ Booker, a real profile in courage!”

It's disturbing how mentally and emotionally unstable many democrat members of Congress are. And just as disturbing their constituents haven't recalled them for no confidence. And even more so, that MSM hails them as normal.

Justice Thomas is one of the best examples of democrat hatred. Democrats lied ( Anita Hill ) to keep him off the bench. Republicans voted him to SCOTUS. One of the most honest people on the planet.

Honor do any Democrats remember what this word means? I don't think so!

Thomas wasn’t the only person to troll Booker:

On this day in 71B.C. the Thracian gladiator Spartacus was put to death by Marcus Licinius Crassus for disclosing confidential scrolls. When informed days later that in fact the Roman Senate had already publicly released the scrolls, Crassus replied “Oh, ok, my bad”.

What Booker was attempting to do during the Kavanaugh hearings was get his name out there for the public to notice.

Booker was claiming he was standing up for the release of classified documents written by nominee Brett Kavanaugh about the use of “racial profiling” at airports in the aftermath of the 9/11 attacks.

Booker made a point of saying he was willing to get expelled from the Senate by releasing ­emails the committee had deemed classified.

His “Spartacus” quote was a reference to the 1960 Oscar-winning movie starring Kirk Douglas as leader of a slave revolt.

Cory will most likely run for president in 2020, via Washington Times: