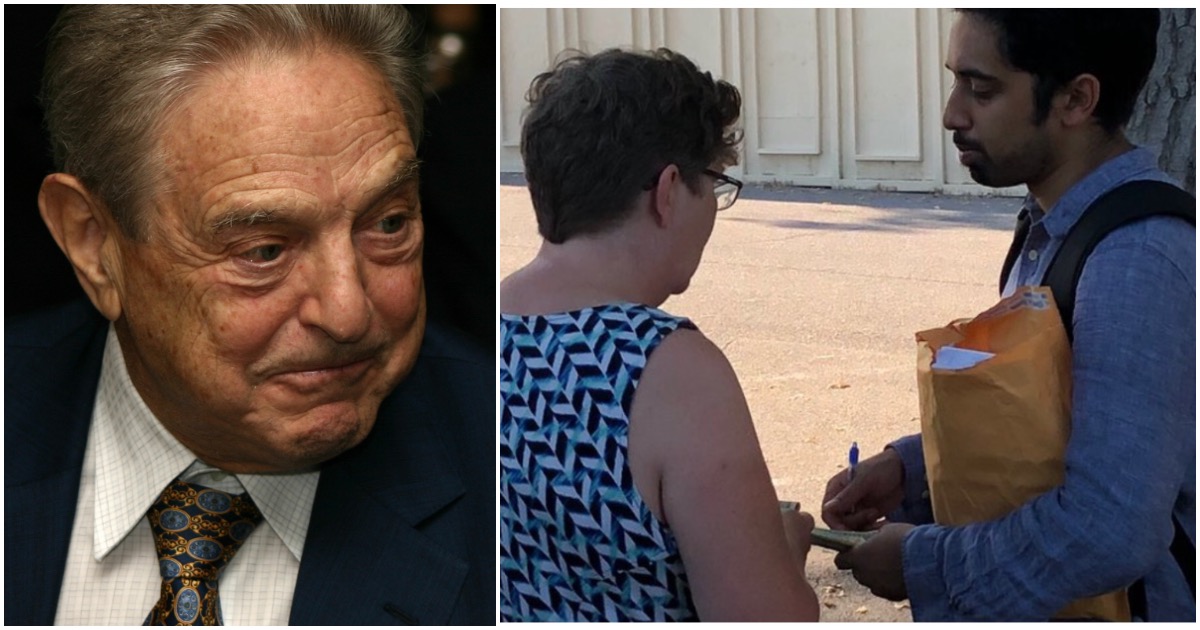 There have often been rumors of liberal demonstrators being paid to protest events.

During the Senate confirmation hearings for Judge Brett Kavanagh, that’s exactly what happened.

Protesters were handed cold-hard greenbacks from a large manila envelope, and Democrat mega-donor George Soros is behind the whole thing.

Check this out, per Liberty Unyielding:

The Democratic senators who protested with interruptions and bloviating screeds against the proceedings had clearly made their preparations in advance.

Oooooh my god. Full-scale mutiny from the Dems on the Senate Judiciary Committee. Harris cuts into Grassley's intro, then Blumenthal calls for a motion to adjourn. pic.twitter.com/Hl4FUHn7qL

If Supreme Court nominee Brett Kavanaugh is proud of his career, if he has nothing to hide – why are senators not allowed to see 90% of his record?

But then there were the aspiring impromptu “protesters” encountered by three doctors visiting from Texas. The doctors, who stood in line with them outside, told interviewer Adam Schindler that they witnessed organized activists with a literal bag of cash paying the rent-a-mob to shriek, act out, and disrupt the hearing.

Transcript of the video from Real Clear Politics:

TOM SCHLUETER, TEXAS: Hello, I’m Dr. Tom Schlueter from Texas, we came here to participate in the hearings, to get in the line. They told us to be here at 8:00, 8:30 at the latest, to get in line to go inside and hear the hearings. We got here at about 8:15 and there was already 100 people in line, and most of them would be probably classified by me as ‘opposing everything going on with Judge Kavanaugh,’ and so we began to see a process of things unfolding as we were standing in line that kept the line from going ahead.

One thing was there were people who had come along… who had a bag of money, and people would hand them a piece of paper, and then they would give them money. So we know money was exchanged for some of the people to be here, just to protest.

There was no depth to what their understanding, they were just here to be a disruption, protesters. They were actually told, we heard them say this, ‘when you go in, we want you to yell, to scream, and even possibly to get arrested.’ So that was some of the processes we saw happening…

Here’s a photo of a cash transaction:

It has now been learned that Soros-backed groups were the ones handing out cash to the liberal protesters, per Daily Caller:

A coalition of activist organizations including Women’s March, the Center for Popular Democracy (CPD) and Housing Works have scheduled the near-constant disruptions at the Kavanaugh hearings as part of an organized effort to derail the confirmation process in a series of meetings since he was first nominated.

The cash from the donor-funded groups goes toward the protesters’ post-and-forfeit payments — a small cash sum paid to resolve low-level misdemeanor crimes and avoid jail time.

Those are just some of the details representatives from the three groups revealed in a Monday night conference call planning their next two anti-Kavanaugh protests, one on Thursday and one next Monday.

Linda Sarsour, Women’s March organizer and a Democrat who wants people to stop humanizing Jews, was seen hanging with the activist recruiters outside.

Look who joined the party today. Contrary to @CoryBooker this was not “democracy in action”. It’s paid activism in action. Which I suppose is a certain kind of democracy. Just not the kind this #texan thinks is bennificial. #KavanaughConfirmationHearing pic.twitter.com/Viv8vui2u8

Does anybody have any thoughts on this? Kind of a big deal, isn’t it?

Why isn’t this a bigger story?

American Music Icon Dead at 72; Was Set to Tour This Summer
Flag And Cross

Director Of The CDC Claims That European-Style Health Passes ‘May Very Well Be A Path Forward In The U.S.
The Political Cowboy