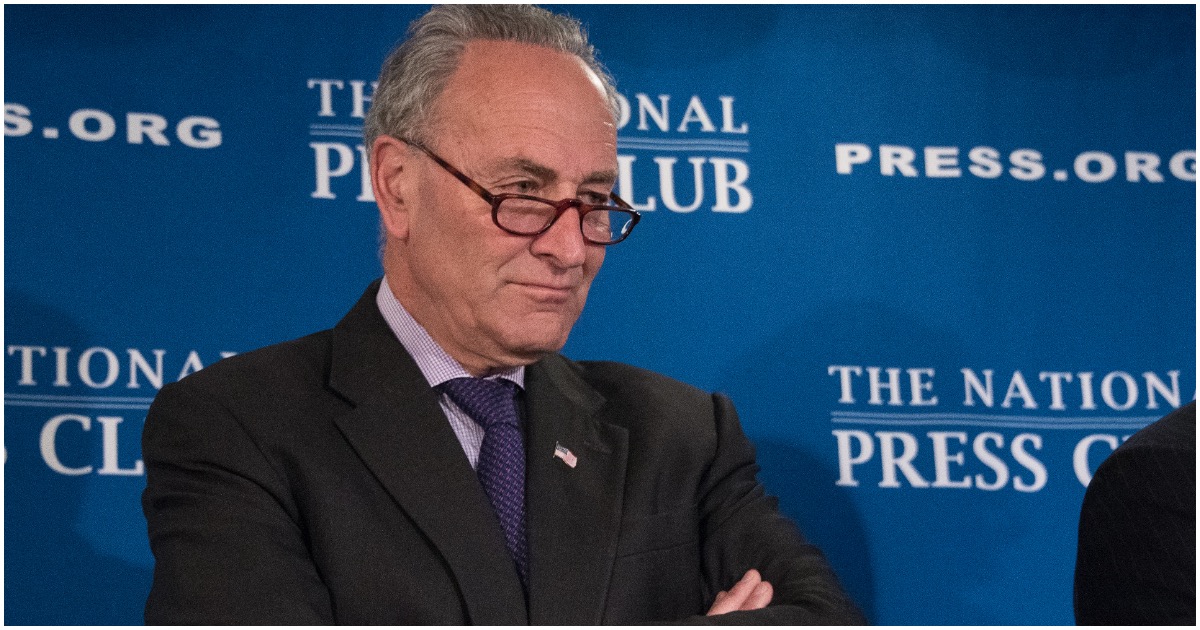 Senate Minority Leader Chuck Schumer (D-NY) is intent on impeaching President Donald Trump, as is everyone who associates with the left. The problem is that Trump has not committed an impeachable offense.

That’s quite the obstacle to overcome.

Nevertheless, Schumer took to the streets with a megaphone to declare that Trump should be impeached soon.

In fact, if Democrats retake the House or Senate in November, watch out.

Senate Minority Leader Chuck Schumer has remained tight-lipped about Democrats’ plans for impeachment if they retake Congress in November, but he tipped his hand while marching in a Labor Day parade Monday.

“When are you all going to impeach [President Donald] Trump?” a parade onlooker asked in a video uploaded to YouTube.

“The sooner the better,” Schumer said into his megaphone.

Of course, Schumer isn’t the only Democrat politician who has called for Trump’s impeachment in order to score political points.

How can anyone forget about Texas Democrat Rep. Al Green?

Hours after he stood in front of a nearly empty House chamber to introduce articles of impeachment, Green sat alone in the middle of the chamber as the House voted 364-58 on a “motion to table” the resolution, effectively killing it.

Democratic Texans largely joined their Republican colleagues in supporting the motion to table Green’s resolution. Of 36 Texans in the U.S. House, only Lloyd Doggett of Austin, Filemon Vela of Brownsville and Sheila Jackson Lee of Houston, all Democrats, joined Green in voting against the measure to table. U.S. Reps. Marc Veasey, D-Fort Worth, and Joaquin Castro, D-San Antonio, were among four House members who voted present.

Green’s articles of impeachment accused Trump of committing “high misdemeanors” while in office and asserted he is “unfit to be President.” Yet his resolution did not touch on Russia or that country’s potential interference in the 2016 elections, the issue that some Democrats have argued could warrant an impeachment vote in the future following the conclusion of an ongoing investigation by U.S. Special Counsel Robert Mueller.

In laying out his resolution on the House floor midday Wednesday, Green called it one of the “greatest moments” of his life. He proceeded to thank his staff for their help drafting the resolution before reading all eight pages of it aloud.

Here are just a few of Green’s latest tweets:

Whether we like it, want it, or oppose it, the November election will be about impeachment. #CountdownToImpeachment #ImpeachmentIsNotDead

The refusal and failure of Congress to act on pending public safety gun legislation is more than shameful, it is a sinful form of complicity. #EnoughIsEnough #JacksonvilleLanding

Whether we like it, want it, or oppose it, the November election will be about impeachment. #CountdownToImpeachment #ImpeachmentIsNotDead

What we have long recognized, others are starting to acknowledge: an unfit president should be impeached. #CountdownToImpeachment #ImpeachmentIsNotDead

What’s funny about Green and others like him wanting to impeach Trump is that they’d be stuck with Mike Pence, a man far more religious and conservative than the president himself.

Fun fact: Did you know Schumer is related to comedian and anti-Trump actress Amy Schumer?