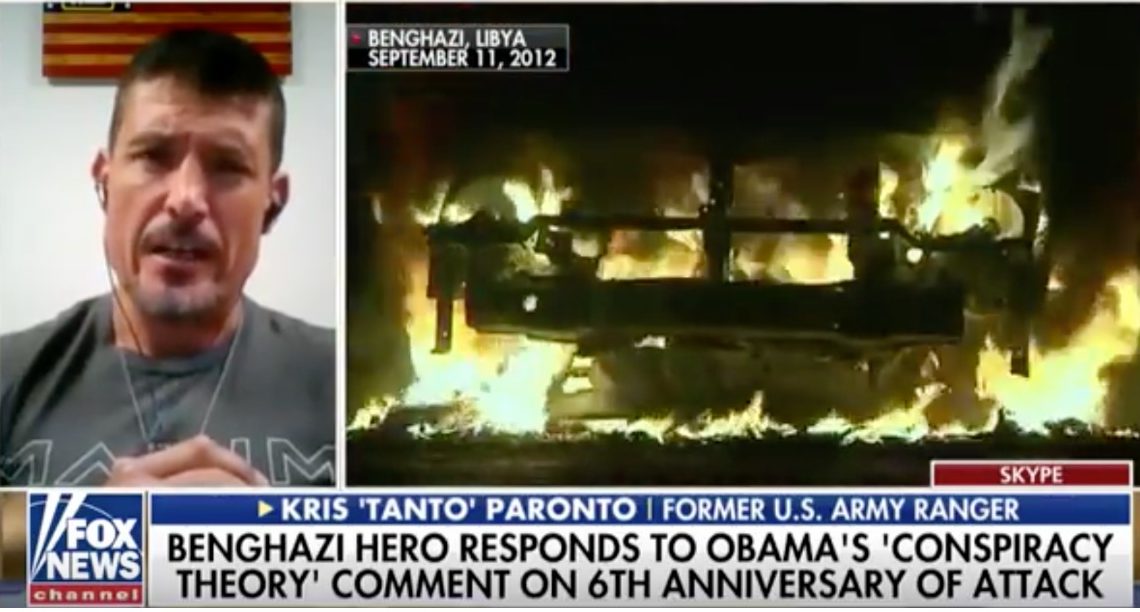 He did so after the former president declared the attack on a CIA compound in Libya, where four Americans were ambushed and killed, to be a “wild conspiracy theory.”

Here’s the message, in case it was missed:

During an interview with Fox & Friends First, Paronto made it crystal clear how he felt about Obama’s words, shredding him to pieces in the process.

On “Fox & Friends First” on Tuesday, Paronto slammed Obama for being dismissive of the 2012 terror attack on a U.S. diplomatic compound in Benghazi, Libya, which left four Americans dead.

“To hear Obama say that, it’s just another slap in the face,” Paronto said. “It makes all of us tremendously angry, because he’s trying to rewrite history and say that Benghazi didn’t happen.”

Makes sense. Democrats have often been accused of revisionist history if things don’t go their way.

He said this just reinforces how important it is for Benghazi survivors and the family members of victims to speak the truth about what happened on September 11, 2012, and in the attack’s aftermath.

Paronto was one of the security contractors who fought to repel terrorists from the besieged American diplomatic compound.

“You had Hillary Clinton say, ‘What difference does it make?’ That was hurtful, that was hurtful to the families. And now you’ve got Barack Obama calling it a ‘conspiracy,'” Paronto said, saying it is “disgraceful and sickening” that they refuse to honor the families of Christopher Stevens, Sean Smith, Tyrone Woods and Glen Doherty.

Because of soldiers and patriots like Paronto, America is the greatest nation on earth. For him to have to tell a former commander-in-chief to cut the nonsense speaks volumes.

Here were Obama’s words, which initially set everything off:

“It’s not conservative, it sure isn’t normal — it’s radical,” Obama says of the rise of far-right, while citing conspiracy theories that include his birth certificate, Benghazi and science and facts.

Obama criticizes Americans for embracing “wild conspiracy theories — like those surrounding Benghazi. Or my birth certificate.”

Minutes later accuses GOP of “cozying up” to KGB & letting the “Russians hack” our election.

That horrible day has scared me! Me being a veteran would have done anything to help and be by the sides of my brothers when the administration failed too! Brother if I was there I would have took a roof and fought by your side!

Thank you brother for setting him straight on the facts. It’s an honor to see you well. It’s Unfortunate with the divider and Chief we had during that time no one sent help. Or the question is, could they have but didn’t want to.

Never forget????????????????Hillary needs to be locked up for Benghazi alone – that was like a professional hit on Ambassador Stevens. He mustve been getting ready to out her on arming the rebels. pic.twitter.com/kVn11jseWe

Is Latest Aspirin Backtracking An Example Of ‘Fudging The Science’ For COVID?
The Lid

Is Latest Aspirin Backtracking An Example Of ‘Fudging The Science’ For COVID?
October 17th, 2021 The Lid

Media bury mass shooting because the shooter was black (but so were his victims)
October 17th, 2021 Liberty Unyielding