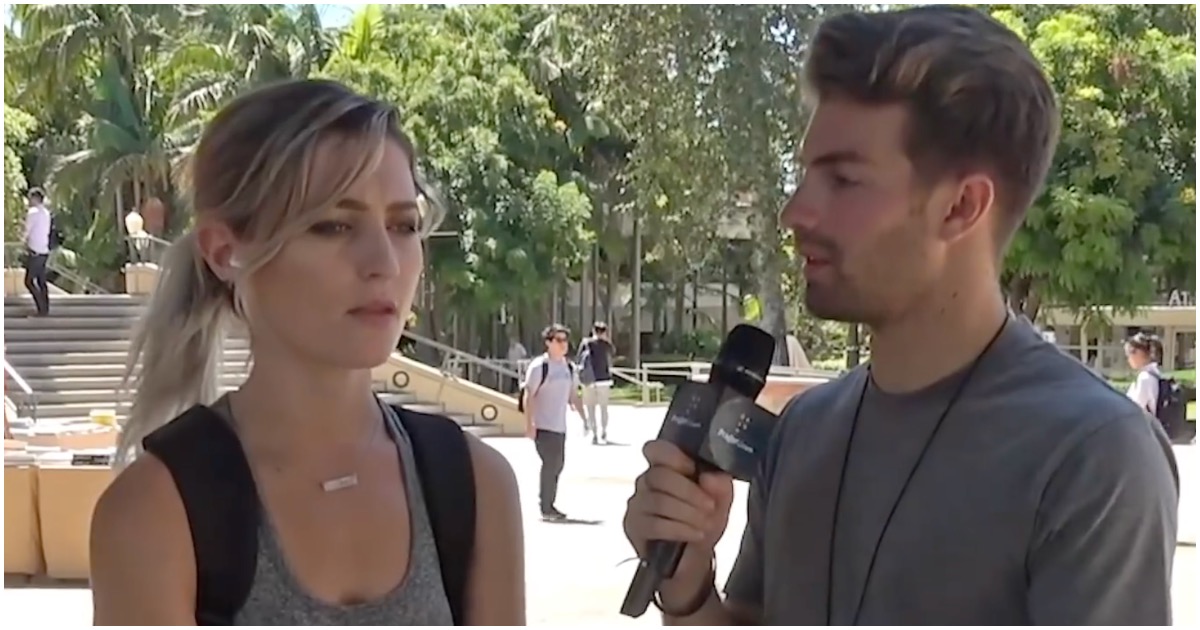 Will Witt of PragerU visited the campus of UCLA and asked college students what the minimum wage should be.

Their answers were surprising, and conservatives will be pleasantly surprised – for the most part.

Most students said wages should range anywhere from $15-25 an hour, which would kill small businesses, lay off employees, and/or raise prices.

As Witt continued to suggest further increases, going as high as $45 an hour, one student asked: “Where do you draw the line? That’s the question.” He then agreed to $45.

However, the student noted that when his former job raised the wage to $11 an hour, the company cut employee hours to compensate.

Witt then asked two students if everyone should have the same base salary, even if some people work harder than others. One stated that while such a situation doesn’t seem fair, the base salary should remain the same. The other seemed to get Witt’s reasoning, ultimately saying that such a system would be “silly” because the business would be “wasting their own resources” on an employee that is losing them money.

Well, at least we now know at least some young people understand that minimum wage spikes are job killers.

18 states and 20 cities raised their minimum wages earlier this year, per USA Today:

The movement to lift earnings of low-paid workers will gather force in 2018, with a growing number of states and cities raising their minimum wages as high as $15 an hour.

On or about Jan. 1, 18 states and 20 cities, including many in California, will hike their base pay because of laws or ballot initiatives that mandate gradual raises over several years or automatic cost-of-living increases. Later in the year, another three states and 18 cities and counties will boost their pay floors, according to the National Employment Law Project, a worker advocacy group.

Twelve of the states and many cities are set for relatively large increases as part of a multiyear phase-in, while nine states are rolling out smaller cost-of-living bumps.

The pay hikes have been linked, at least in part, to nationwide fast-food worker demonstrations and demands for a $15 wage since 2012. Those pleas were initially deemed far-fetched. But now California, New York and more than a dozen cities are moving toward that standard by 2022 in a wave that will cover one in five U.S. workers

Why a miniumum wage hike is bad, in case you weren’t already clear – from Values & Capitalism:

Wages are the price for labor. They are the compensation workers require for their time and efforts. As with any price, regulatory controls—whether a price ceiling or a price floor—distort the market, creating either a shortage or a surplus. If the price of milk is capped at $1 per gallon, grocers will soon run out, as customers buy more than they need while prices are low. If the price of bread is not allowed to fall below $10 per loaf, grocers won’t be able to sell their stock as consumers will wait until prices drop to buy bread.

In the same way, minimum wage—a price floor on labor—creates a surplus of workers. At a price of $7.25 per hour, workers who are willing to sell their labor outnumber business-owners willing to hire them. There is only so much money to go around, and—like the grocery store’s customers—businesses cannot spend more on wages than they earn in revenue. And of course, not every type of labor is the same—some jobs simply aren’t worth paying someone $7.25 an hour to complete.

The result: Fewer jobs and permanent unemployment for those unable to produce more than $7.25 worth of goods for their employers. Hardly a means to help the working class.