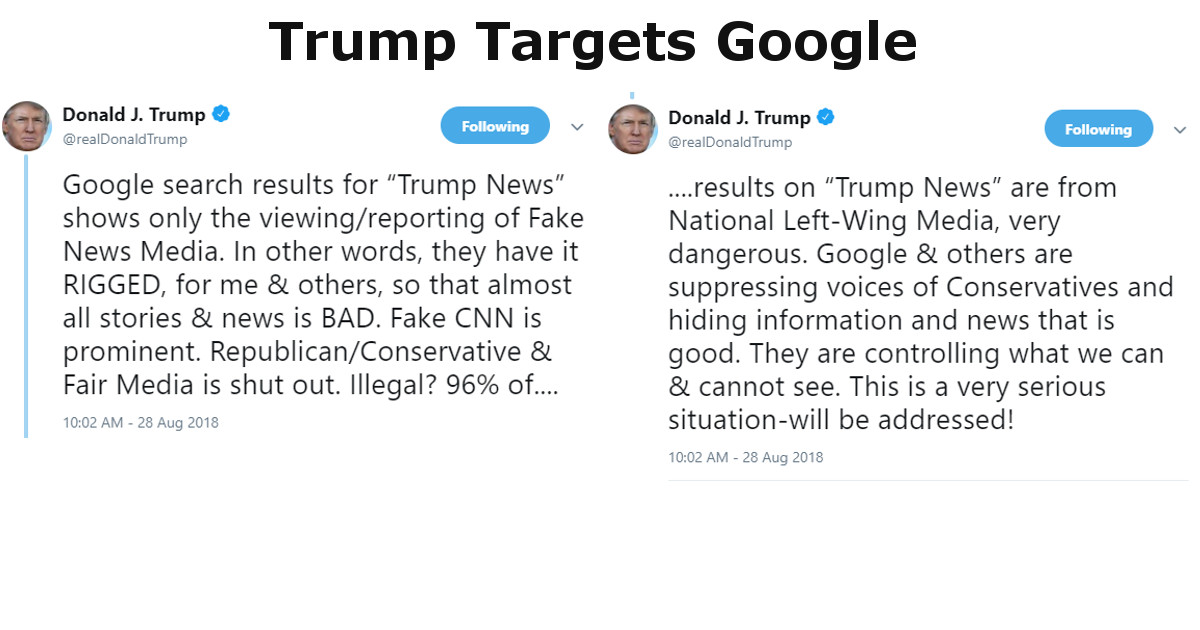 Yesterday, we brought to your attention a study revealed that doing a search for Donald Trump on Google was greatly biased to give left-leaning websites, the most being CNN.

The study revealed that 95 of the first 100 listings were for left-leaning websites with only 3 for neutral (Wall Street Journal) and 2 for right-leaning Fox News.

This comes after numerous reports of social media giants including Facebook and Instagram, censoring posts from conservatives.

On Tuesday, Trump targeted Google for their censorship of searches, referring to the search on himself, accusing Google of rigging the search against him.

(Constitution.com) – In this new world of endless streams of information, there are going to be struggles over freedom, and the limitations of corporate control.

For years, Silicon Valley has been throwing “terms and agreements” down our throats in such a way as to almost guarantee that they aren’t read.  In fact, I’m sure there are creative lawyers out there just waiting for the first case to crack that little goldmine open, spilling forth all sorts of settlements in which they get to rave in front of the court about the 4th amendment.  Just like in the John Grisham books.

But, in those agreements, we have signed away the rights to our content.  Our opinions and ideologies are all harvested and turned into cash by the data peddlers of Silicon Valley, all while these millennial millionaires and billionaires steer the country to the left through censorship, shadow banning, and propaganda…

It’s one thing for President Trump to take notice and tweet about the unconstitutional censoring being done by social media, Google and other websites, but it’s another thing for anyone to take action to stop.

Some members of Congress have also expressed concern about the censorship, but again, it seems that nothing is being done to stop it.

Unless something is legally done to stop this censorship of conservatives, the tech giants of Silicon Valley will eventually totally silence anyone who disagrees with their leftwing political views.