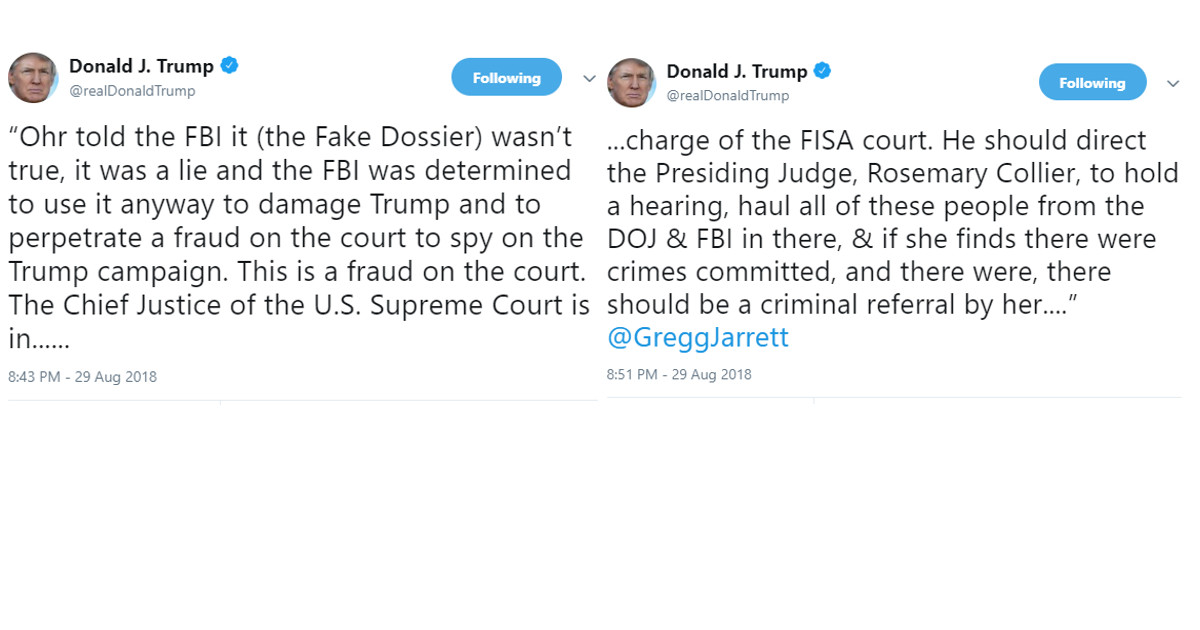 In the past week or so, President Trump has been very vocal on demanding investigations into the actions of a number of Democrats including Hillary Clinton, James Comey and many others.

While appearing on Sean Hannity’s program on Fox News this week, Gregg Jarrett, an attorney and legal analyst proposed the idea that the judges on the FISA court should start looing into members of the DOJ and FBI for the way they mishandled and misrepresented information in order to obtain their spying warrants.

President Trump followed Jarrett’s appearance by tweeting that US Supreme Court Justice John Roberts should order the chief FISA judge to hold hearings and if necessary to file criminal charges against a number of Obama administration people.

Those involved the shady dealings include Sally Yates, James Comey, Andrew McCabe and even Rod Rosenstein.

(National Sentinel) – Criminal Misconduct: During an appearance Wednesday night on Fox News‘ Sean Hannity program, network legal analyst and attorney Gregg Jarrett suggested that judges on the secretive FISA court should call in Deep State figures from Obama’s FBI and Justice Department and press charges against them for allegedly misrepresenting information used to get a spying warrant on a Trump campaign figure.

And not long after Jarrett’s appearance, POTUS Donald Trump voiced his approval for that legal strategy.

“Ohr told the FBI it (the Fake Dossier) wasn’t true, it was a lie and the FBI was determined to use it anyway to damage Trump and to perpetrate a fraud on the court to spy on the Trump campaign. This is a fraud on the court. The Chief Justice of the U.S. Supreme Court is in charge of the FISA court. He should direct the Presiding Judge, Rosemary Collier, to hold a hearing, haul all of these people from the DOJ & FBI in there, & if she finds there were crimes committed, and there were, there should be a criminal referral by her….” @GreggJarrett.

Many are wondering why Attorney General Jeff Sessions hasn’t already started investigations in the many allegations of wrong doing and unethical practices that were used by numerous members of the Obama administration – namely in the DOJ and FBI.

This is one reason Trump angrily said that Sessions was missing in action and not doing his job.

Many, including myself, would like to see Trump remove Sessions and replace him with someone who will investigate all of these allegations against a whole slew of Democrats.