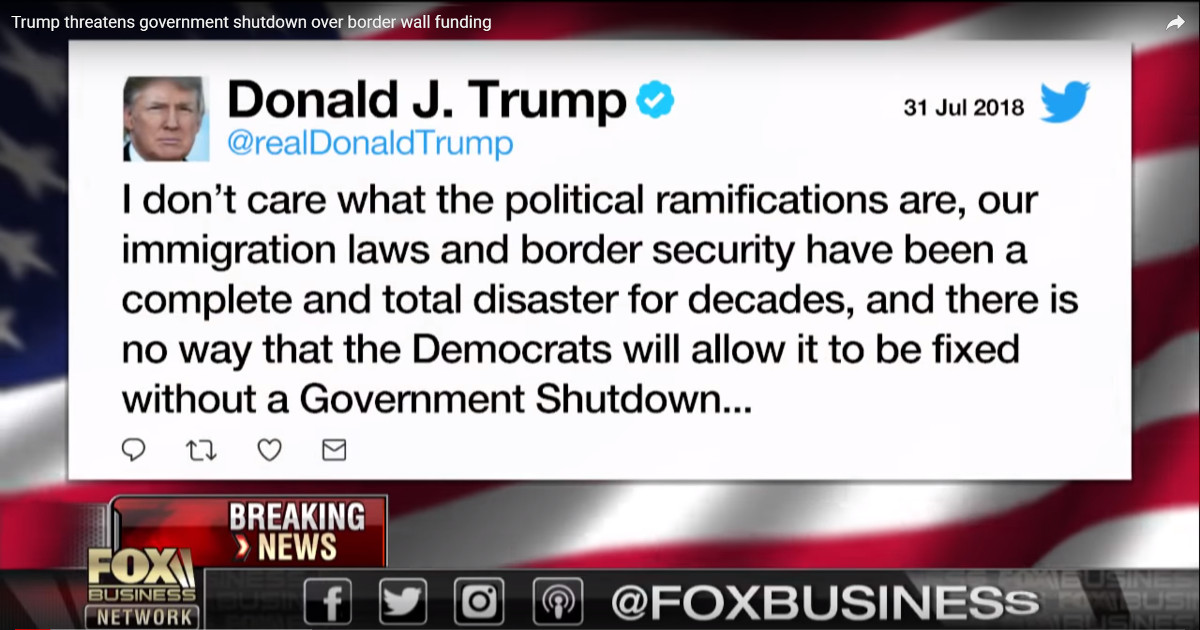 In 2006, when George W. Bush was president, a number of today’s top Democrats voted for border security and the building of a border fence/wall. Among those who favored building the border wall back then was Sen. Barack Obama and Sen. Chuck Schumer. Once Obama became president he realized that he needed the millions of illegal votes of illegal aliens. He opposed building a border wall or doing anything to secure our southern border with Mexico. Once Obama opposed a border wall, so did Schumer and the rest of the Democrats who blindly followed their leader.

When Donald Trump was only a wealthy businessman running for the Republican nomination for president, he promised to enforce America’s immigration laws, tighten border security and build a border wall to help stop the flood of illegal aliens from entering our country. Democrats screamed and hollered, calling Trump a hater, bigot and racist, among other things that I won’t repeat, because of his stance on immigration.

Since he was sworn in as America’s 45th president, he has worked to get the funding to build a border wall along the Mexican border. At one point, he went so far as say that he would make Mexico pay for the border wall, but that was stated more out of frustration than reality.

Trump has proposed an immigration reform package that includes special protection for Obama’s DACA recipients and more. It allows a way for many to earn their citizenship. Many conservatives and some Republicans feel that Trump’s proposal is far more generous than it needs to be, yet, Democrats instantly balked and said they would never vote for it. It didn’t matter that it gave them much of what they have been demanding as the only thing that mattered to Democrats is that it was Trump’s proposal and they have vowed to work against anything and everything Trump tries to accomplish. And once again we see the illogical nature of Democrats who will reject something they’ve been wanting just because it comes from Trump. That’s the same mentality of a pouting three-year-old who refuses a cookie that he/she really wants, because it’s mom offering the cookie and they are mad at mom.

Trump has been able to get Congress to appropriate some funding for the border wall, but not nearly enough for the entire project and once again, Trump has grown frustrated with Democrats. That frustration is about to boil over as Trump is now threatening to allow the government to shut down unless Congress approves the rest of the funding for the border wall. In a tweet, Trump stated:

“I would be willing to ‘shut down’ government if the Democrats do not give us the votes for Border Security, which includes the Wall! Must get rid of Lottery, Catch & Release etc. and finally go to system of Immigration based on MERIT!”

“We need great people coming into our Country!”

The federal fiscal year ends September 30, just over a month before the midterm elections. Sen. Majority Leader Mitch McConnell, who is not a big supporter of Trump, says that funding the border wall will probably not happen until after the midterm elections and he also said that it’s unlikely a government shut down will take place.

So, who do you believe – Trump or McConnell? Personally, I trust Trump far more than I trust McConnell, who is as worthless of a Senate leader as John Boehner was at being House leader.