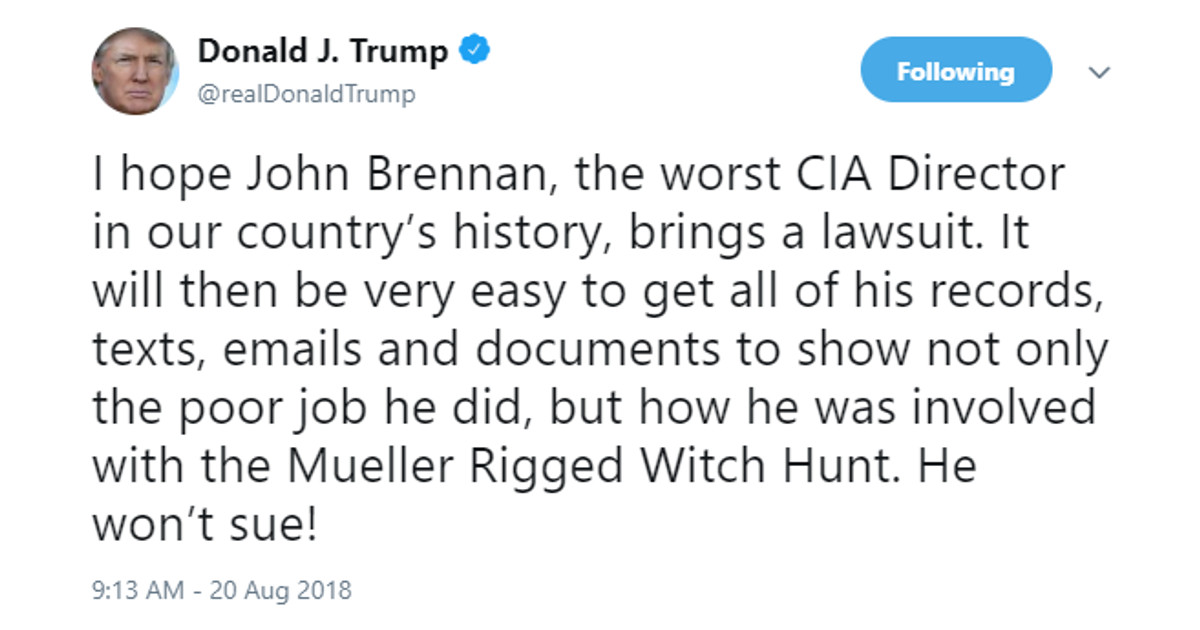 Democrats and the mainstream media always have something which they take issue with President Donald Trump on a daily basis. It seems if Trump sneezed at the wrong moment, they would pounce on it and make it into something it’s not.

This time, they are having a cow because Trump revoked the security clearance of former (Obama) CIA Director John Brennan. Reasons for the revocations differ greatly depending on who you listen to.

Brennan is now threatening to file a lawsuit against Trump to get his security clearance back and Trump isn’t backing down, but telling Brennan to go ahead and sue, knowing that he hade sufficient grounds and the legal right to yank Brennan’s clearance.

(Washington Time) – President Trump said Monday that he hoped John O. Brennan sues him and accused the former CIA director of being in cahoots with the Mueller investigation.

The president said Mr. Brennan won’t follow through on the threat because of how easy it would be to “show not only the poor job he did, but how he was involved with the Mueller Rigged Witch Hunt.”

“I hope John Brennan, the worst CIA Director in our country’s history, brings a lawsuit. It will then be very easy to get all of his records, texts, emails and documents to show not only the poor job he did, but how he was involved with the Mueller Rigged Witch Hunt. He won’t sue!”

Mr. Trump brushed aside the support former national security officials have expressed for Mr. Brennan over the past few days. He accused those speaking out of wanting to preserve their own security clearances, not to defend the former CIA director…

Everyone is saying that what Trump did has never been done before, but there have been numerous former government officials who had the security clearances revoked after their service. Besides, just because it’s not normally done doesn’t mean it’s wrong to do it now. Everyone is forgetting that it’s not just because of what Brennan has said about Trump, but what he’s done to support the effort to undermine Trump’s presidency.