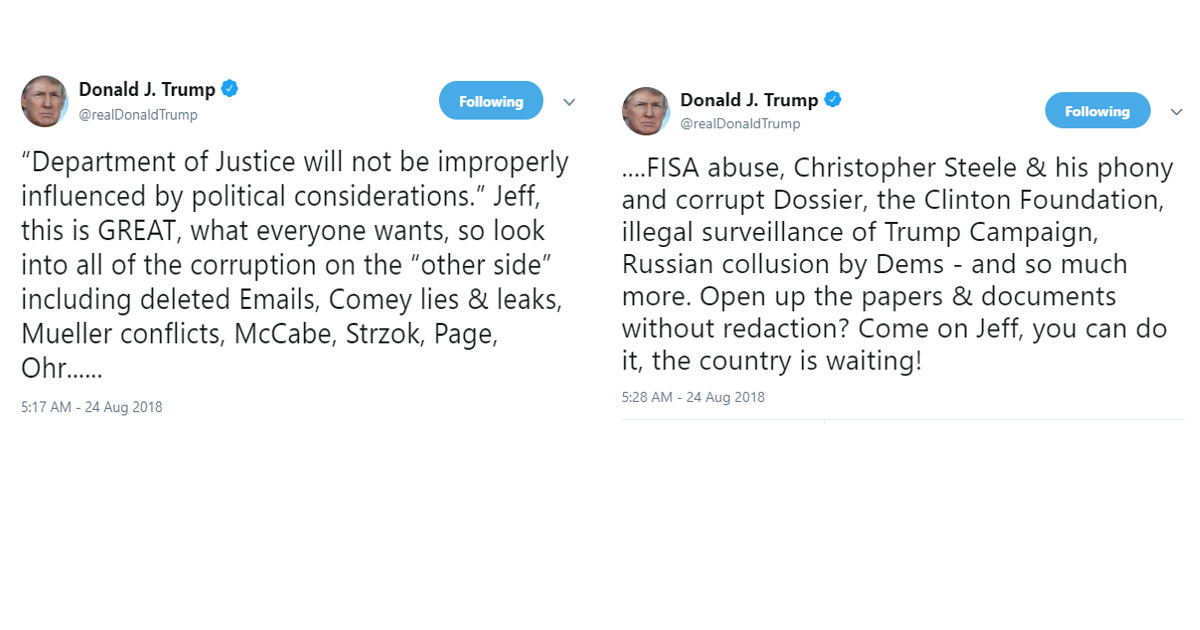 For the past few months, the war of words between President Donald Trump and Attorney General Jeff Sessions has been escalating.

In a recent interview, Trump expressed his disappointment with Sessions, referring to his recusal on a Russian investigation and failure to take control of DOJ.

Trump went so far as to say that Sessions was missing in action, ignoring some of the other things Sessions has done to carry out Trump’s policies.

Trump has now begun prodding Sessions to begin investigating the corruption and other deeds of the ‘other side’, referring to Democrats and their many antics that have been in the news over the past year.

(Fox News) – President Trump renewed pressure Friday on Jeff Sessions to investigate the actions of his adversaries – what he called “corruption” on the “other side” – after the attorney general warned the president that his department would not be “improperly influenced” by politics.

In an extraordinary new clash between the president and the nation’s top law enforcement official, whom Trump appointed and who was one of the president’s earliest and most enthusiastic 2016 supporters, Sessions had issued the warning a day earlier after Trump alleged in a “Fox & Friends”  interview that his AG never “took control” of the DOJ.

“I took control of the Department of Justice the day I was sworn in,” Sessions fired back.

In a set of Friday morning tweets, Trump cited that statement as a jumping off point for what he wants Sessions to pursue next:

“Jeff, this is GREAT, what everyone wants, so look into all of the corruption on the ‘other side’ including deleted Emails, Comey lies & leaks, Mueller conflicts, McCabe, Strzok, Page, Ohr … FISA abuse, Christopher Steele & his phony and corrupt Dossier, the Clinton Foundation, illegal surveillance of Trump Campaign, Russian collusion by Dems – and so much more. Open up the papers & documents without redaction? Come on Jeff, you can do it, the country is waiting!” …

What Trump is calling Sessions to do is what many Americans have been calling for, but frustrated that nothing has been happening.

The question many of us have been asking is why hasn’t Sessions already started looking into some, if not all of the allegations alluded to by President Trump?

If Sessions wasn’t missing in action as he claimed after Trump’s recent criticism, then why hasn’t any of these things been investigated?

However, caution is needed as just because Trump is calling for action from Sessions, doesn’t mean it’s going to happen.