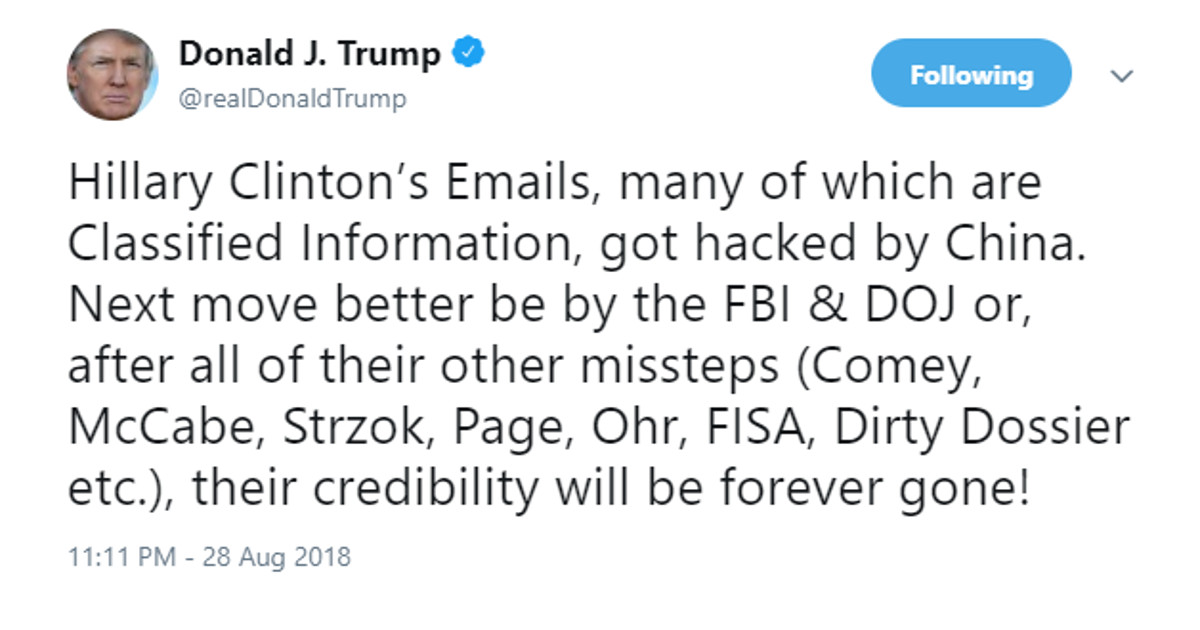 Yesterday, we posted that a company in Washington DC served as a front for the Chinese government and they had hacked into Hillary Clinton’s email server when she was Secretary of State.

In the report, we learned that the Chinese hack gave them real time access to every email Hillary sent and received via her private unsecured server.

We also know that some of those emails contained classified State Department information.

The news of the Chinese hack has spread like wildfire, causing President Donald Trump to tell the FBI and DOJ that they had better move on this or they will have lost all credibility forever.

(Constitution.com) – The American people have waited a long time for this day, and it was a surprise that a Chinese hacking operation is what brought it to fruition.

Throughout the entirety of the 2016 election, We The People demanded that Hillary Clinton be held accountable for her crimes of negligence in regard to her unsecured email server.  The sensitive and often classified materials being routed through the illegal and immoral fixture in the State Department were bad news for national security, and the fact that Clinton was so evasive in her own cognizance of the issue was more than enough of an admission of guilt for the American electorate.

Now, after James Comey and others have wholly refused to confront the queen of corruption over her profoundly unethical behavior, and after a possible hack by the Chinese exposed just such a concern in recent days, the President is no longer hinting at a new Hillary Clinton investigation.

He is demanding it…

Will this lead to the inevitable downfall of Hillary Clinton?

Will Attorney General Jeff Sessions finally do his job and investigate and indict Hillary Clinton and others of their wrong doing?

Hopefully, the demand from Trump will either spur action from Sessions or cause Trump to replace Sessions with someone who do the job.