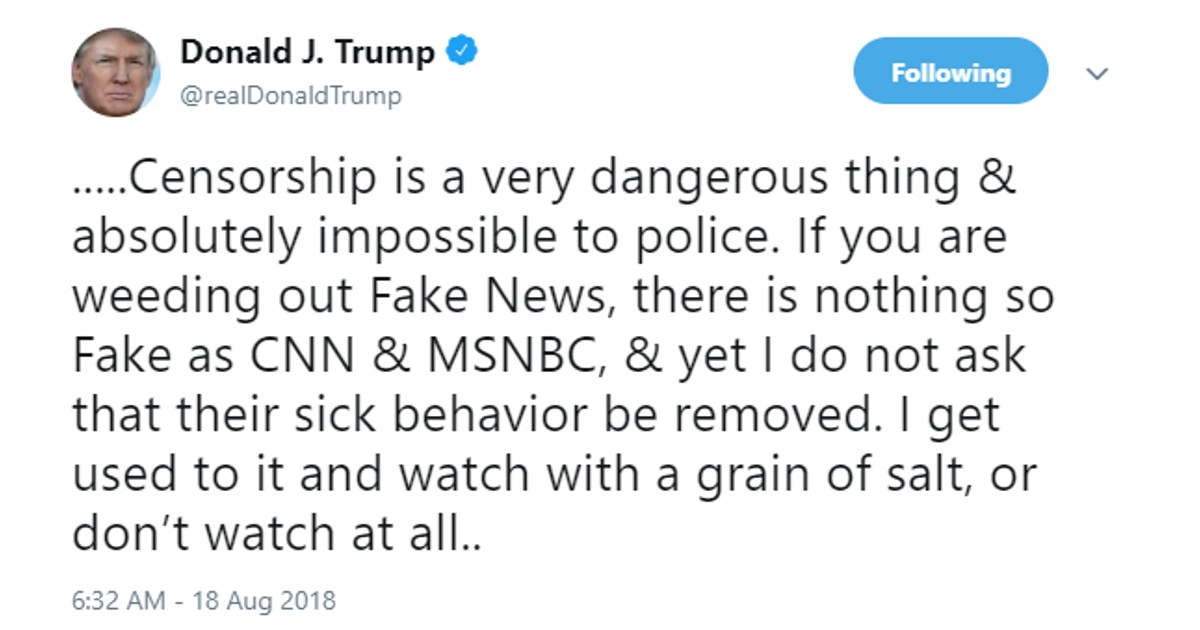 Another result of Barack Obama’s socialist and anti-American dictatorship is that liberals believe they can trample all over the constitutional rights of conservatives. They quickly hide behind the First Amendment right to free speech and then refuse to allow those who disagree with them to exercise the same right to free speech and those who own and control social media are among the biggest violators.

President Donald Trump has taken notice and tweeted about their censorship being a dangerous thing. Facebook has used their unconstitutional censorship of conservatives to try to financially shut down many conservatives so as to silence the truth.

(Washington Post) – President Trump on Saturday waded into the growing debate over the role of social media companies in policing public discourse, accusing them of “totally discriminating” against Republicans and conservative commentators.

In morning tweets from his private resort in Bedminster, N.J., the president suggested the companies, which he did not name specifically, were engaging in censorship.

“Too many voices are being destroyed, some good & some bad, and that cannot be allowed to happen,” Trump wrote. He added that “mistakes are being made” and vowed that his administration “won’t let that happen.”

The president’s remarks came two weeks after YouTube, Apple, Spotify and Facebook took down Web pages operated by conspiracy theorist Alex Jones, a Trump supporter and radio-show host who had the president as a guest during Trump’s 2016 campaign…

Having President Trump take notice and tweet about it is one thing, but getting him to take action to stop it is something else. Trump, Congress and the courts need to take action to stop the illegal and unconstitutional censorship of the truth, simple because it hurts the agenda of the liberals who control social media