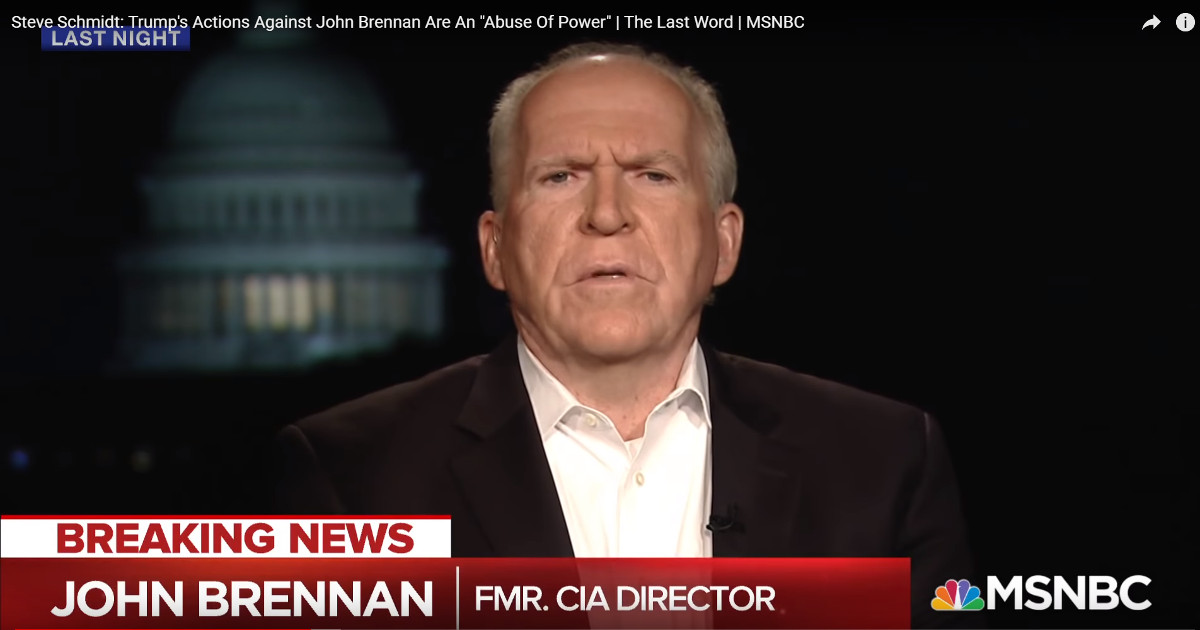 The mainstream media and some Democrats are running around like panicking chickens clucking out that President Donald Trump is retaliating against former CIA Director John Brennan. The reactions come after it was announced Wednesday that Trump revoked Brennan’s security clearance.

Brennan, CIA Director under Barack Obama, has been very critical of Trump, which is being used by Democrats and the mainstream media to claim that Trump’s action is just dictatorial retaliation designed solely to silence opponents. They claim this is a very dangerous precedent.

What they are not telling you is that Trump has not acted alone. Back in July, Sen. Rand Paul (R-KY) tweeted:

“Is John Brennan monetizing his security clearance? Is John Brennan making millions of dollars divulging secrets to the mainstream media with his attacks on @realDonaldTrump ?”

“Today I will meet with the President and I will ask him to revoke John Brennan’s security clearance!”

“Mr. Brennan has a history that calls into question his objectivity and credibility.” [transcribed from CBS This Morning]

“More broadly, the issue of Mr. Brennan’s security clearance raises larger questions about the practice of former officials maintaining access to our nation’s most sensitive secrets long after their time in government has ended. Such access is particularly inappropriate when former officials have transitioned into highly partisan positions and seek to use real or perceived access to sensitive information to validate their political attacks.”

This came AFTER Brennan flatly denied that the Steele dossier had any role in the Russian investigation. However, prior to Brennan’s denial, several others in the know claimed the dossier played a large part in the call for the investigation.

Additionally, some have claimed that Brennan helped supply information on Trump to Steele and/or the Clinton campaign.

So, is Trump retaliating or just using common sense?

Many are asking why EX-government officials continue to retain their security clearances after leaving public office. Many say that it’s because they volunteer and help out various government agencies and need the clearance to do so.

My answer to this argument is that once someone leaves public office, their security clearance should be revoked. IF they volunteer or work with any government agency where their clearance is needed, then it can be restored on a limited time basis and reviewed at regular intervals to determine if it is still needed.

As for retaliation, Barack Obama and Hillary Clinton have been known to retaliate against those they didn’t like or didn’t like them.

“Mr. Trump clearly has become more desperate to protect himself and those close to him, which is why he made the politically motivated decision to revoke my security clearance.” [transcribed from CBS This Morning]

“I’ve seen this type of behavior and actions on the part of foreign tyrants and despots…I never ever thought that I would see it here in the United States.” [transcribed from CBS This Morning]

Brennan’s statement is proof that he is ultra-biased against Trump and pro-Obama. He said he never thought he would ever see it here in the United States. What about the way Obama retaliated against Maricopa County Sheriff Joe Arpaio AFTER Arpaio launched an investigation into Obama’s birth certificate as presented by the White House?

When Arpaio’s investigators got close to learning the truth that Obama’s official birth certificate was a forgery, and poorly done one at that, Obama launched a vicious attack on Arpaio, using then Attorney General Eric Holder and the Justice Department. They filed bogus racial profiling charges against Arpaio and stripped him and his department of their authority to enforce federal immigration laws.

When up to 75% or more of the crime in your jurisdiction is tied to illegal immigration and illegal drug trafficking across the southern border by Hispanics, it only makes sense for the sheriff’s department to focus on Hispanics. It would have been a dereliction of duty if they focused on whites, blacks or Asians.

As for Hillary Clinton, all you have to do is talk to anyone who has worked close to her from the days back in Arkansas to the current (I have and some of them are still scared of her). They will tell you that she is a vicious, angry and vindictive woman who is quick to retaliate against anyone who crosses her.

If Brennan was America’s top spy, then he should have been well aware of these things, so his statement about Trump revoking his security clearance proves that Trump was justified in doing so.