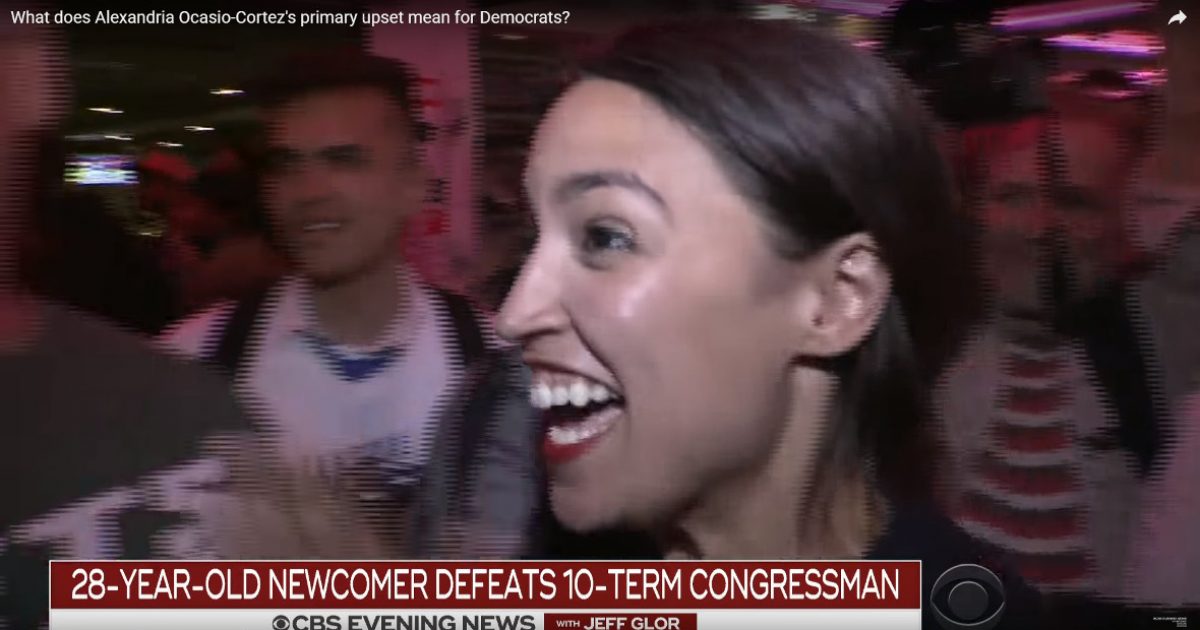 Alexandria Ocasio-Cortez is a socialist, like Sen. Bernie Sanders. Knowing she can’t get anywhere in politics running on a socialist ticket, she is running as a Democrat, as Sanders did in 2016. It makes no real difference since the Democratic Party is socialist in most of their platforms, policies and agenda.

Ocasio-Cortez, 28, has worked as a bartender and waitress on her path to being a social activist and educator for several organizations. Earlier this year, she ran what many thought was a hopeless campaign for the US House of Representatives against long-time incumbent Rep. Joe Crowley, who has held the office since 1999. To the amazement of everyone, including Ocasio-Cortez, she defeated Crowley in the primary earlier this summer.

Since winning the Democratic primary, Ocasio-Cortez has taken to the road, sometimes with fellow socialist Sen. Bernie Sanders, to help campaign for other Democratic socialists running for office.

Everywhere she travels, she preaches her socialist agenda, which includes FREE Medicare for all, FREE college tuition for all and a federal minimum wage of $15 per hour. The crowds appear to love her message, including all of the FREE benefits without realizing that it will cost EVERY taxpayer dearly in order to provide all she wants.

Just a few weeks ago, it was revealed by the Mercatus Center at George Mason University, that the FREE Medicare for all that Ocasio-Cortez and Bernie Sanders advocate would cost taxpayers $32.6 TRILLION over 10 years. That means around $3.2 TRILLION a year MORE in government spending, just for this one FREE program. In 2017, the proposed federal budget was only $4.2 trillion and the federal government only took in about $3.6 trillion in revenue. Now add another $3.2 trillion to the budget and you’ll see the annual deficit increase by $4 trillion.

There are about 122 million people in the US that pay federal taxes. To afford the additional $3.2 trillion a year, every taxpayer would have to pay an additional $26,229 in federal taxes. And remember, that’s not taking into account that Ocasio-Cortez also wants free college tuition for everyone. I’ve yet to see an estimated cost for that, but be assured, it would undoubtedly cost every taxpayer another $20,000 or MORE a year in taxes.

What is FREE about this? How many of you can afford to fork out $50,000 a year to pay for these FREE benefits?

She is also ignorant of what $15 per hour minimum wage has done in places like Seattle, where the Democratic leadership mandated it. It cost workers their jobs, seen others get their hours cut and forced many businesses to raise their prices. Overall, it was determined that low-end workers were taking home less money than before the huge hike in the minimum wage.

Evidently, even among Democrats, Ocasio-Cortez’s message isn’t resonating or making sense to them.

So far, she has campaigned and supported four other Democrats in various primary elections and so far, all four of them lost. Her latest fatality was Kaniela Ing of Hawaii, who probably wished Ocasio-Cortez had never been invited to help him campaign. At recent rally in Hawaii Ocasio-Cortez was supposed to introduce Ing to the crowd, but after her socialist spiel, she just sat down without introducing Ing, who went down in flames in his primary race.

Based on her track record so far, it would be great for Republicans everywhere to see Ocasio-Cortez help campaign for their Democratic opponents.