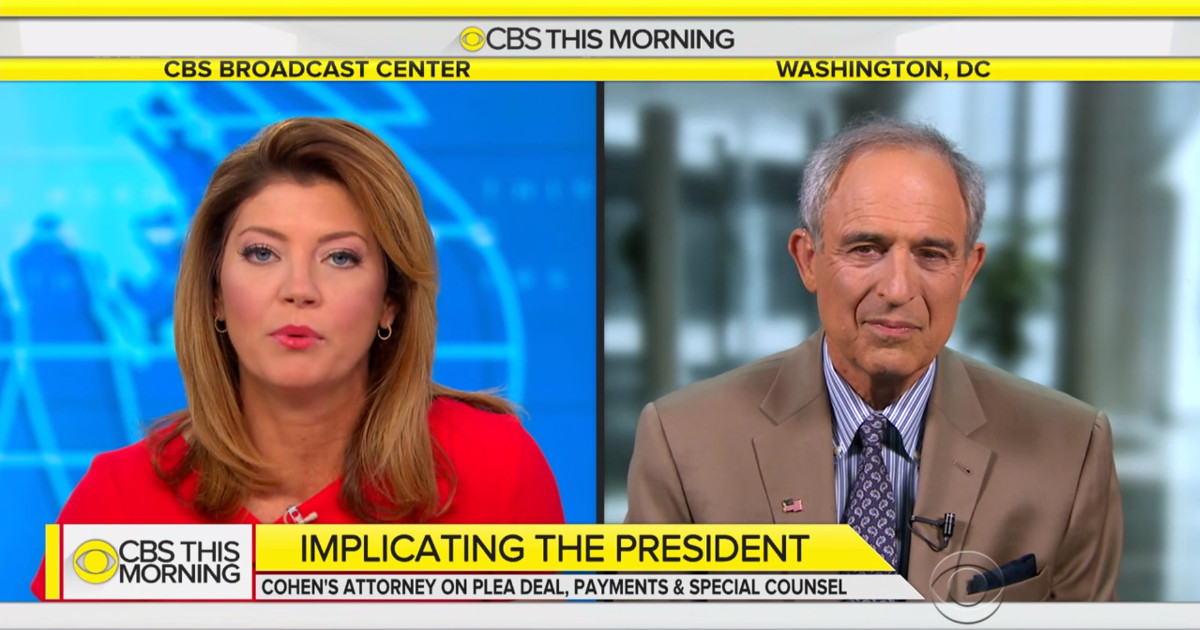 Yesterday, all of the media sources were gloating over the revelation that Donald Trump’s former attorney Michael Cohen had turned on Trump, throwing him under the Mueller bus. Cohen has reportedly stated that Trump instructed him to lie and to pay off two women, including Stormy Daniels, in order to quiet them. Many are saying this was a political campaign coverup, which would make the payoffs illegal.

The media is also talking about Trump being caught in a lie, when he first denied any knowledge of the offs and then later acknowledging that he did know.

Democrats are drooling at the mouth with excited anticipation of Donald Trump being brought up on charges that could result in his impeachment and possible removeable from office.

CBS is known to be very hostile to Trump and rarely ever comes to his defense on anything, but when reporting on the news of Michael Cohen’s plea deal and turning on Trump, they raised a very good question in defense of Trump.

They were interviewing Cohen’s attorney, Lanny Davis, one of the hosts of CBS This Morning, asked Davis what evidence they had to prove Trump committed a crime, Davis said that all that mattered is that an attorney stated what happened and that is all that is needed.

The host continued to question Davis about how can anyone believe Cohen who has admitted to being a criminal and to lying, so there needs to be evidence against Trump and if so, do they have it.

“He [Giuliani] said the president reimbursed Michael Cohen. So there is no dispute that his lawyers have not taken it back. They wrote it to the special counsel that President Trump committed a crime by directing – and why did he direct? Because he didn’t want his signature on the check. Why? Because he was covering up right before the election. Or else, why didn’t he do it himself?”

If you believe Davis, Trump is convicted simply on the word of a known lying attorney, without any actual evidence. In many court cases today, it’s difficult to convict anyone solely on the word of a single liar without providing any kind of physical or forensic evidence.

If Trump is impeached because of this, his fate is still in jeopardy. If an impeachment takes place before the midterm elections, there are enough RINOs in the House that will side with the Democrats to vote for articles of impeachment.

If convicted by the Senate, Trump’s presidency is over and Vice President Michael Pence would be sworn in as America’s 46th President.