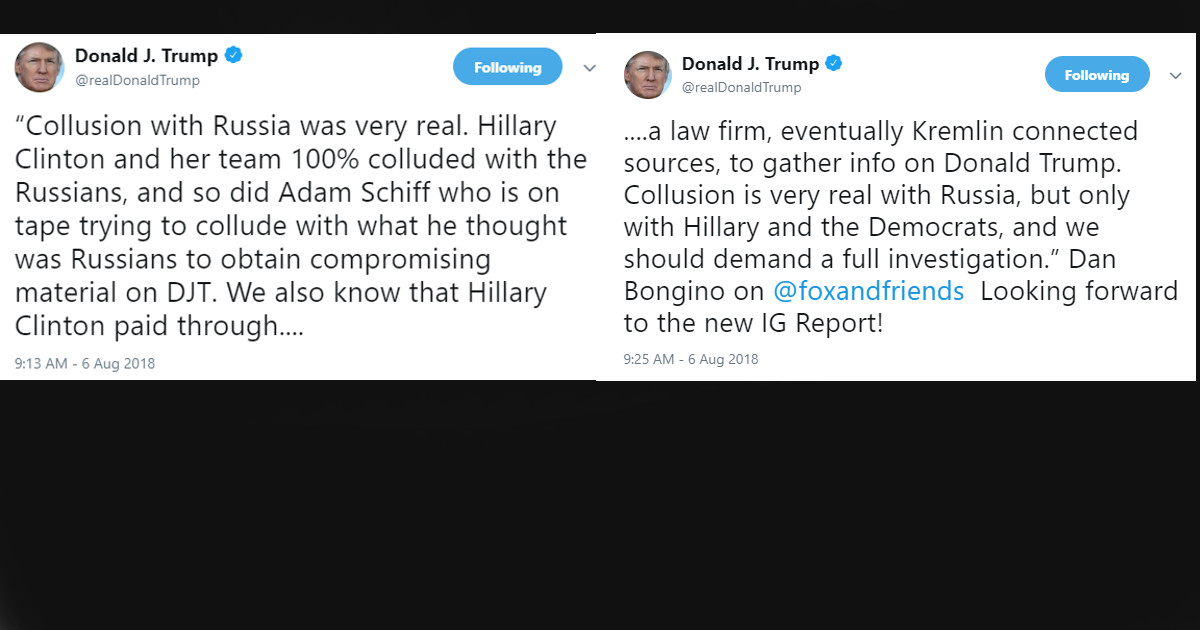 After 14 months of special counsel investigation into the allegations that Donald Trump and his campaign colluded with Russia, not one shred of evidence has yet been produced. However, through other investigations, there has been a mountain of evidence indicating that Hillary Clinton, the Clinton campaign and the Democratic National Committee did collude with Russia.

(Newsmax) – President Donald Trump tweeted Monday that “collusion with Russia was very real” during the 2016 campaign — but that it involved the Democrats — and he demanded a new federal investigation of Hillary Clinton and House Intelligence Committee Vice Chairman Adam Schiff on their Kremlin ties.

“Hillary Clinton and her team 100 percent colluded with the Russians, and so did Adam Schiff, who is on tape trying to collude with what he thought was Russians to obtain compromising material on DJT,” the president said in a pair of Twitter posts: …

The tweets came after the president on Sunday defended Donald Trump Jr.’s meeting with a Russia lawyer and other operatives in June 2016 in hopes of obtaining negative information on Clinton…

It’s time that Americans stand up and demand justice, starting with a special counsel investigation into Clinton and Schiff collusion with Russia. If such an investigation is given the same latitudes that Mueller has been given, it should result in numerous Democrats, some still in government jobs (DOJ and FBI), being indicted for various crimes. Democrats have been screaming for justice for over a year and it’s time they get what they asked for, only our way, not theirs.