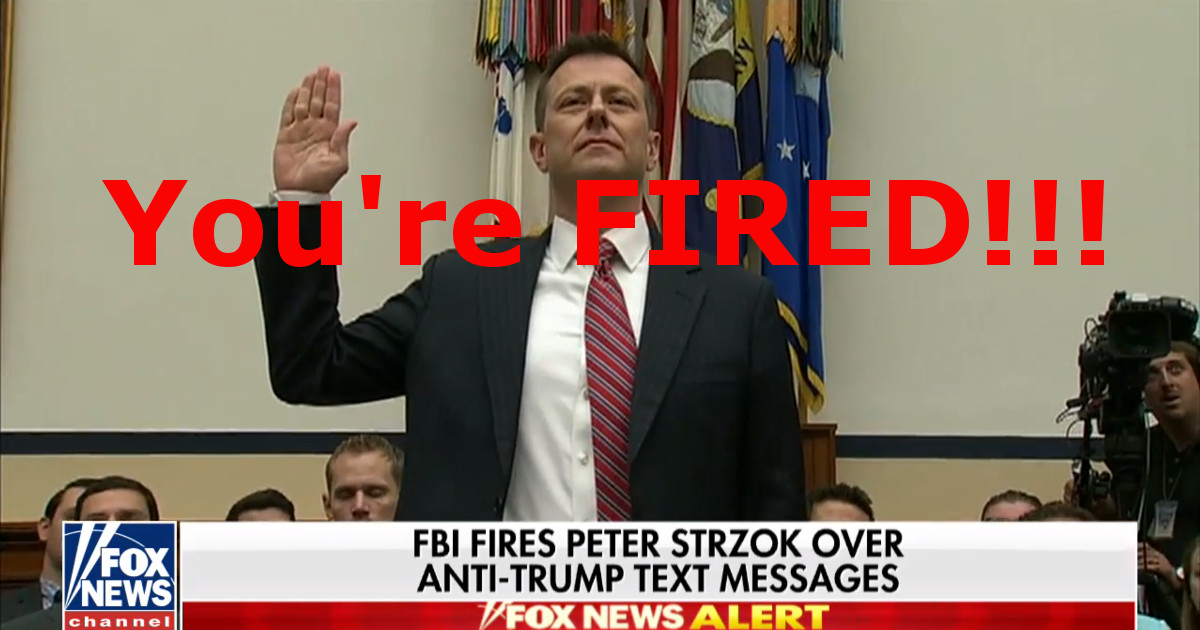 Many months ago, evidence surfaced, from tens of thousands of text messages, that FBI official Peter Strzok and FBI attorney Lisa Page were part of a conspiracy to block the election of Donald Trump and then to undermine his presidency. Page has since left the FBI, but Strzok was only re-assigned, leaving many to wonder why he wasn’t fired for his illegal and unethical actions.

They need wonder no more as it was announced yesterday that Strzok has finally been fired. The only question left is why it took so long for officials to do the right thing for someone who so misused his position in the FBI for his personal agenda?

(Fox News) – FBI official Peter Strzok, who played a lead role in both the Russian meddling and Hillary Clinton email probes but became a political lightning rod after the revelation of anti-Trump text messages, has been fired.

Strzok attorney Aitan Goelman said in a statement Monday that his client, a 21-year FBI veteran, was fired Friday afternoon, claiming this was a departure from standard practice and politically motivated. Goelman said bureau Deputy Director David Bowdich “overruled” the FBI’s Office of Professional Responsibility to remove him.

“This decision should be deeply troubling to all Americans,” the attorney said.

President Trump and his allies for months, though, have hammered the former FBI agent and cast him as the poster child for anti-Trump bias within the bureau and Justice Department.

Reacting to the firing, the president tweeted, “finally,” while asking whether the Russia case will now be dropped:..

Strzok may have been finally fired, but that doesn’t mean he is out of the woods. Sen. Lindsey Graham (R-SC) is calling for a special counsel investigation of the FBI and the bureau’s anti-Trump activities, including those of Strzok, Page, Ohr, McCabe and Comey, all of which could face jail time.