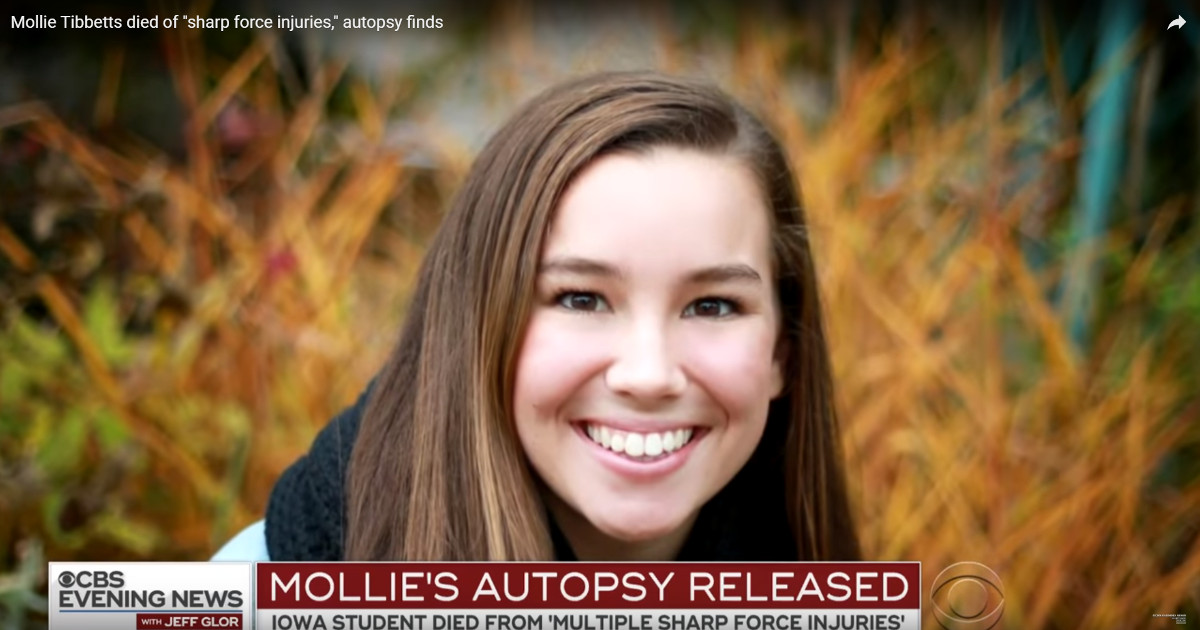 This past few weeks, the news has been filled with the name of Mollie Tibbetts. The 20-year-old Tibbetts was a student at the University of Iowa, located in Iowa City.

On July 18, Tibbetts left to go jogging in Brooklyn, Iowa, a community of only about 1,500 people. That was the last time anyone reportedly saw her.

When she was reported missing, a massive manhunt was launched to search for her, but she wasn’t found. Her boyfriend, Dalton Jack, told the media:

“It’s Brooklyn. You don’t lock your doors. We lock our doors now. Every night.”

According to the many reports, Cristhian Bahena Rivera, a worker at a local dairy, apparently saw Tibbetts jogging and decided to do something with or to her. No one saying what he did, other than stab her multiple times with a sharp object.

Her body was found in a field a month later, after Rivera admitted to police that he killed her and then guided them where to find her body.

Rivera is now in jail, charged with first-degree murder.

Many reports have circulated that Rivera is an illegal alien, stirring the debate on border security and immigration policies.

“For 34 days, investigators searched for 20-year-old Mollie Tibbetts. Yesterday, an illegal alien, now charged with first-degree murder, led police to the cornfield where her body was found.”

‘The Tibbetts family has been permanently separated. They are not alone.”

Appearing at a rally in West Virginia, President Trump told the crowd:

“You heard about today with the illegal alien coming in, very sadly, from Mexico and you saw what happened to that incredible, beautiful young woman. Should’ve never happened. Illegally in our country. We’ve had a huge impact, but the laws are so bad, the immigration laws are such a disgrace. We’re getting it changed, but we have to get more Republicans.”

Compassion for Tibbetts and her family was lacking when Sen. Elizabeth Warren was asked about Tibbetts murder. Instead, she took the liberty to rant about immigration and the separation of families of illegals, ignoring that the same thing was done while Obama was in office. Warren stated:

Then Warren went on to say:

“I think we need immigration laws that focus on people who pose a real threat and I don’t think mamas and babies are the places we should be spending our resources. Separating a mama from a baby does not make this country safer.”

Warren’s full response seemed impersonal as she went on about her agenda instead of what happened to this young woman.

If you want to get into the politics of what happened, Texas Lt. Gov. Dan Patrick, a Republican, may have said it best:

“On the left, it’s pure politics. They’re playing with people’s’ lives. The blood is on Chuck Schumer’s hands and every Democrat, and the Republicans who won’t change the rules.”

“The CNNs, MSNBCs, most of the print media in this country and Democrats are all accomplices in the death of this young girl and the death of everyone else.”

I’ve been saying something similar for the past decade when I’ve said that Barack Obama should be held accountable for every crime committed by the illegal aliens he allowed to enter and stay in the country. There have been numerous reports of robberies, physical and sexual assaults, rapes and murders, committed by illegals who should NOT be in America.

Obama and his Democrats refused to secure the border. They refused to fully enforce our federal immigration laws. They allowed and supported the creation of numerous sanctuary cities, counties and states.

So, should they not be held as accomplices to the crimes committed by THEIR illegal aliens?

America has enough of a problem with crime and violence, we don’t need to let illegal aliens add to it.

It’s time to build a border war, place armed border security along the border with orders to shoot if necessary to stop illegal immigration. Plus, it’s time to deport the 10-20 million illegal aliens living ILLEGALLY in the United States. This is our country, not theirs. If they want to come here, let them do it legally, like so many others do.