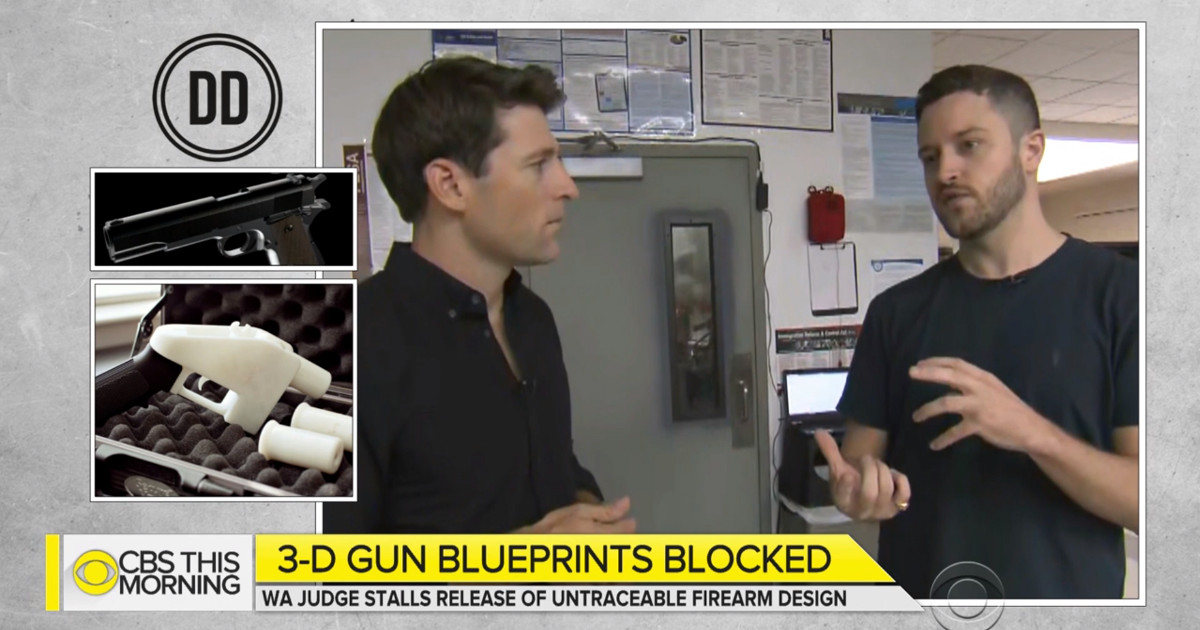 Gun control fanatics are all in an uproar over the availability of downloadable plans to make your own gun via a 3D printer. One would think the sky is falling or something worse because the electronic files have been made available on the internet and that anyone can access them, print out the parts and then build their own gun. Gun control activists point out that there is no serial number for tracking and that the plastic weapons are undetectable by metal scanners (forgetting that the bullets do show up on the scanners).

Cody Wilson, owner of Defense Distributed in Austin, Texas received permission from the Trump administration to make the digital files for 3D guns available over the internet. Wilson had planned to make a number of new files available for downloading yesterday, Aug. 1, the date set by the federal government.

However, once again, 1 liberal judge stepped in and exerted his own person bias by issuing an injunction against Wilson to prevent him from posting any NEW blueprint files, until the matter can be officially dealt with.

Rep. Frank Pallone (D-NJ), has introduced a bill into the House that would ban the production of 3D guns both commercially and privately.

Think about this bill. Pallone and other anti-gun Democrats are worried that criminals will make their own 3D guns and use them to commit crimes and kill people, so he wants a law to prevent that from happening. That may sound okay on the surface, but, the reason criminals are called criminals is that they DON’T abide by the laws we already have, so what makes anyone think that such a law will actually stop a criminal from printing out a gun just because it’s against the law?

Tony Dokoupil of CBS went to Austin to interview Cody Wilson and the questions asked by the reporter showed his obvious bias and the absurdity of his logic. Here is part of the interview as transcribed off the news:

Wilson: I’m talking about files, I’m not talking about the guns. I’m not a licensed gun manufacturer. I don’t make guns at this location. I have data, I can share the data… The future is simply, digital fabrication.

Dokoupil: What makes you comfortable with a world where people can pump out guns in their garage any time they want to?

Wilson: What’s gonna make me comfortable is when people stop coming into this office and acting like there is a debate about it. The debate is over. The guns are downloadable. The files are in the public domain.  You cannot take them back. You can adjust your politics to this reality. You will not ask me to adjust mine.

The absurd question that Dokoupil tried to bait Wilson with, in an effort to place a guilty trip on him, was:

Dokoupil: When somebody downloads a gun, from your website with your blueprints and kills somebody with it, how are you going to feel personally?

Wilson: I don’t believe I provide you with anything other than the general knowledge of what an AR-15 is.

That same question can be asked to a person selling the blueprints or plans for building your own car. What if someone builds their own vehicle that doesn’t have a serial number and then uses it to kill somebody?

What about a person who sells a baseball bat only to find out that the person who bought the bat used it to beat someone to death with?

There are designs available on how to make your own hunting knife, so what if someone uses those designs to make a knife and then uses it to kill someone with?

What about a gas station attendant who sells a gallon of gas to someone who then uses it to burn down a building with people in it?

The list goes and on. It’s the same mentality used by anti-gun liberals to sue gun manufactures or even stores who sell a gun that is then used to kill someone with. Wilson has been abiding by every law and is running a lawful business. He is a firm believer in the Second Amendment and believes that every person has the right to own a gun and that it’s a fundamental human right and therefore sees nothing wrong with providing the files on how to print your own 3D gun. He says he will use every resource available to him to protect his right to just post files on the internet.