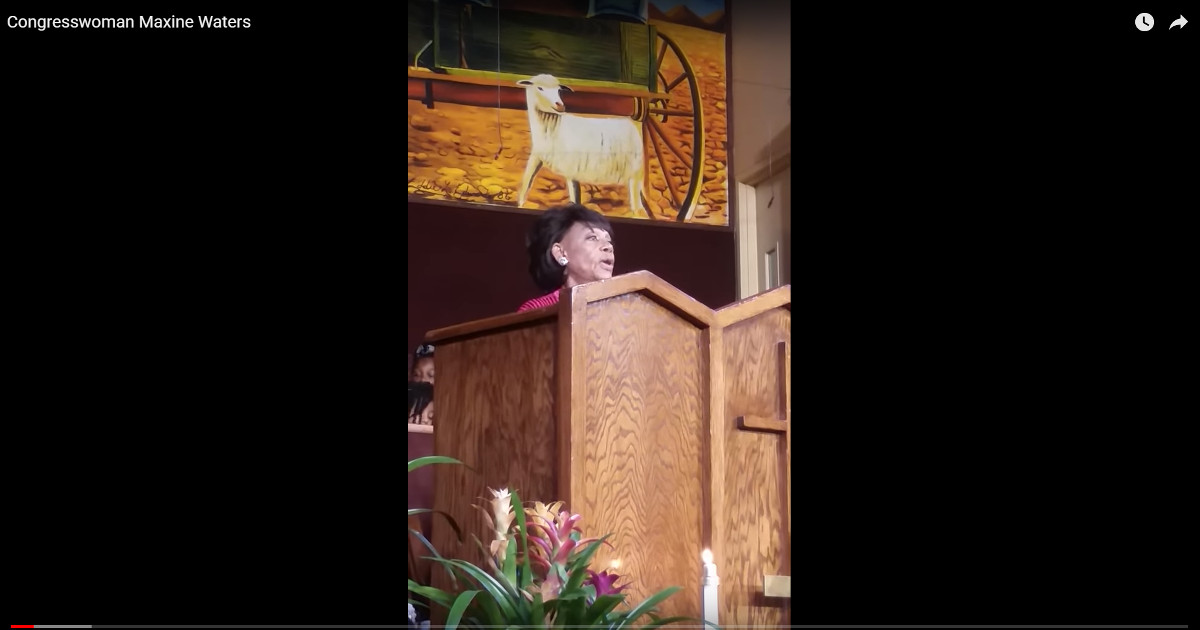 All Waters sees is hatred. She is living and breathing hatred and it’s not only disgraceful but blasphemous when she takes to a church pulpit and spews out her hatred and lies to the people about President Trump.

This past Sunday, Waters was allowed to speak from the pulpit at the First AME Church in Los Angeles, where she openly lied and spewed her venom. She ranted on for 14 minutes and during that time, she stated:

“We never dreamed we’d have someone in the White House who was divisive, who could not tell the truth, and who was intent on not making America great again, but taking America down.”

“You’ve gotta know that I’m here to do the work that I was sent to do, and as pastor said to me when I came in this morning, when God sends you to do something, you just do it!”

“So, I have a message I’m going back to Washington tomorrow morning, I’m going to tell them pastor told me to come here and just do it!”

Waters fails to realize that Barack Obama worked hard to destroy America. Obama bent over to every world leader, except Israeli Prime Minister Benjamin Netanyahu. She doesn’t understand that Obama’s constant violations of the US Constitution, of Congress and the courts are the closest thing America has ever had to a true constitutional crisis. She doesn’t see that Obama made America look weak in the eyes of world. She doesn’t realize that Obama nearly destroyed America’s economy and he gutted our military to the point of nearly making America vulnerable to our enemies. She fails to see that Obama committed numerous acts of treason and that he abused his position to illegally attack conservatives and anyone who opposed his socialist agenda. She refuses to see that Obama violated so many federal laws that he could be in prison for over a century.

No, Maxine Waters is blinded by her racist hatred of Trump that she cares nothing about blaspheming from the pulpit of a church. It’s truly time that this 79-year-old ‘mad black woman’ (her own words) sees her political and public career come to an end. It’s hate-filled racists like her that are helping tear America apart.