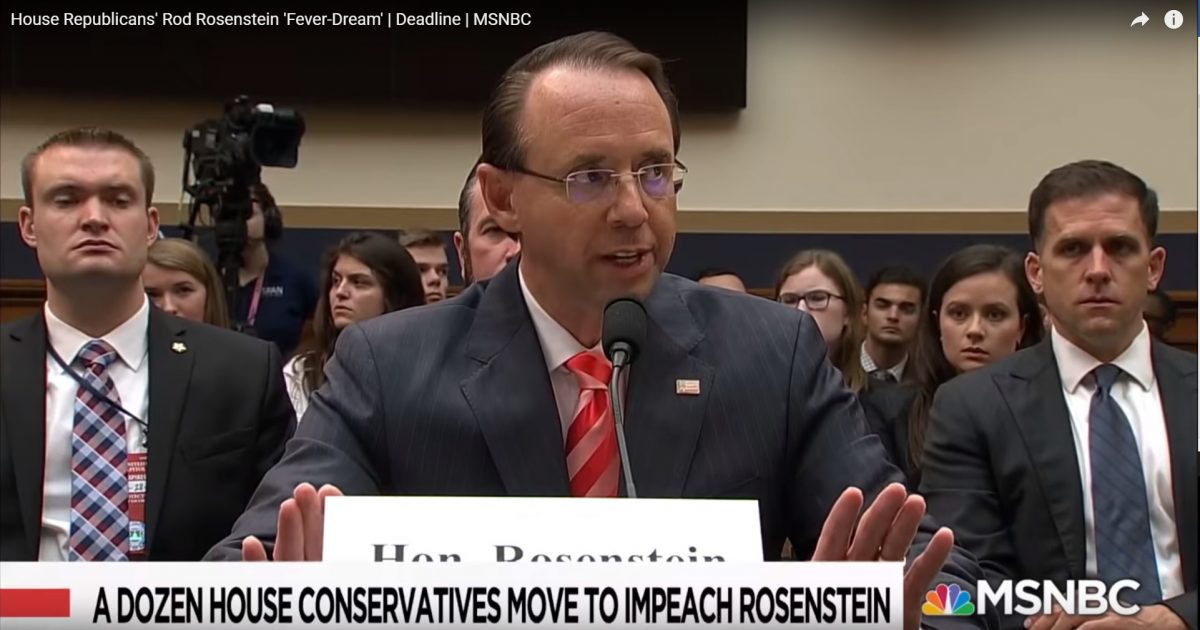 For months, members of Congress have been requesting and then demanding copies of documents pertaining the FBI’s FISA warrant that allowed them to spy on Carter Page at Trump Tower during the 2016 election. Some Republicans have contended that if the dossier was used to obtain the warrant, that the warrant was obtained under false pretenses and therefore was in violation of the law.

Deputy Attorney General Rod Rosenstein has been in charge of the special counsel investigation, which is believed to be based upon the infamous Steele dossier on Donald Trump.

However, Rosenstein has continued to refuse to honor the requests and demands from Congress, leading to an effort in the House to impeach Rosenstein, and if Rosenstein doesn’t begin cooperating and proving the documents in question, Rep. Jim Jordan (R-OH) warns he will force a vote on impeachment.

(The Hill) – Rep. Jim Jordan (R-Ohio) said on Sunday that if the Department of Justice doesn’t hand over documents that Congress has requested, he and other lawmakers will force a vote on the impeachment of Deputy Attorney General Rod Rosenstein.

“If they don’t give us the information that we, as a separate and equal branch of government are entitled to have in order to get answers for the American people, then we will actually call to vote for the impeachment of Rod Rosenstein,” Jordan told radio host John Catsimatidis in an interview on AM 970 in New York.

Jordan and Rep. Mark Meadows (R-N.C.), leaders in the House Freedom Caucus, led a group of conservative lawmakers in filing articles of impeachment against Rosenstein on Wednesday…

Rosenstein should be impeached anyway because he has continually allowed Special Counsel Robert Mueller to go far beyond the intended scope of his investigation. He has allowed Mueller to intentionally target and go after President Donald Trump and has also done nothing concerning Mueller stacking his investigation with 100% anti-Trump Democrats.