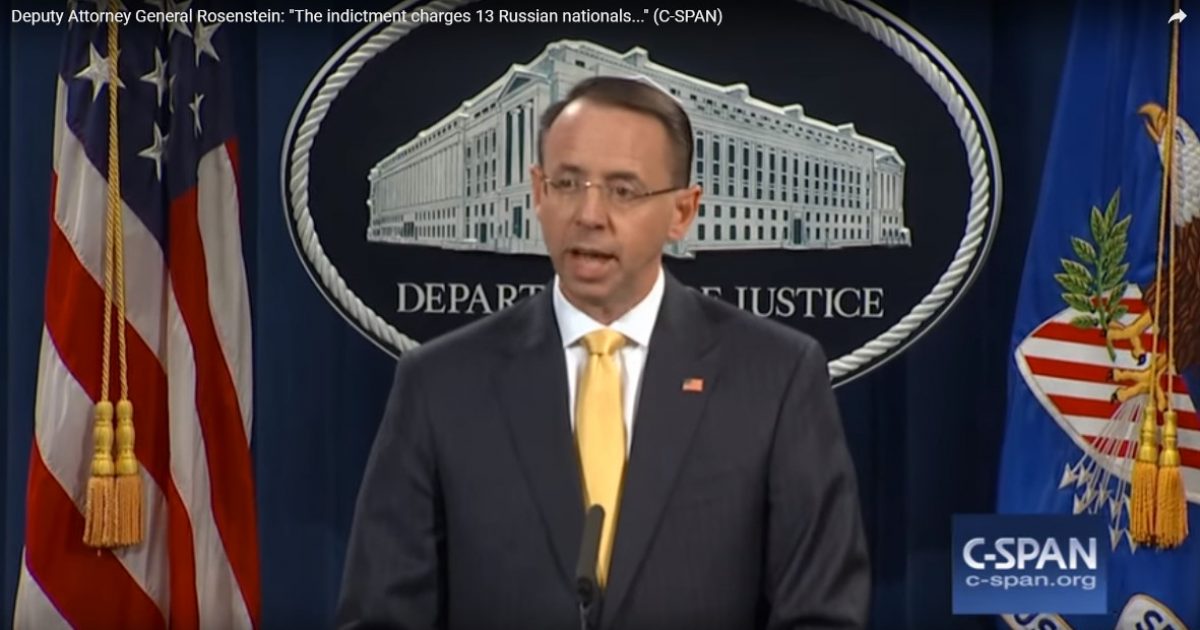 Many people are wondering where Deputy Attorney General Rod Rosenstein’s political leanings are, because he seems to be going against the political party that has elevated his career.

Rosenstein received his J.D. from Harvard Law School in 1989. He then clerked for US Court of Appeal for the District of Columbia Circuit Judge Douglas H. Ginsburg, who was appointed to the federal bench in 1986 by the President Ronald Reagan. Upon completion of his clerking for Judge Ginsburg, Rosenstein was accepted into the Attorney General’s Honors Program, which brought him into the Department of Justice.

Early in his DOJ career, Rosenstein prosecuted cases involving corruption as part of the Public Integrity Section of the Criminal Division. Guess who his boss was? Yep, then Assistant Attorney General Robert Mueller.

Knowing this, many believe it’s not a coincidence that Rosenstein chose the same Robert Mueller to serve as special counsel to investigate the allegations of Russian election interference and possible collusion between the Trump campaign and Russia.

In 2005, President George W. Bush appointed Rosenstein to serve as the US Attorney for the District of Maryland. He continued in the position through Obama’s 8 years in office and into the beginning of Donald Trump’s presidency.

In April 2017, Trump tapped Rosenstein to serve as the Deputy Attorney General, under Attorney General Jeff Sessions. Less than a month after taking his new position, Rosenstein found himself tasked with naming a special counsel to investigate the Russia election allegations. This fell on his shoulders since Sessions recused himself from any dealings with Russia to avoid any consideration of a conflict of interest.

On May 17, 2017, Rosenstein selected his former boss, Robert Mueller, who helped start his career in the Department of Justice to serve as the special counsel. From the time of being Rosenstein’s boss in the DOJ and his being named by Rosenstein as Special Counsel, Mueller served as Director of the FBI, first under President George W. Bush, who appointed him in 2001, into Obama’s tenure in office, leaving the FBI directorship in 2013, where he was replaced by James Comey.

Mueller’s initial task as Special Counsel, was to only investigate the allegations of Russian election interference and if there was any collusion between Russia and the Trump campaign to influence the election.

Additionally, Rosenstein has done nothing concerning the overly biased selection of attorney’s working with Mueller on the special counsel. Of the original 16 attorneys hired by Mueller, half had donated to the campaigns of Democrats, including Hillary Clinton while none ever donated a penny for any Republican candidate. The obvious bias allowed in the special counsel investigation has also caused many to question Rosenstein’s oversight.

Last Friday, Rosenstein held an impromptu press conference where he announced his indictments of 12 Russian intelligence officials for their involvement in the hacking of the Democratic National Committee and the Hillary Clinton campaign. Many believe Rosenstein’s timing was a deliberate attempt to sabotage the meeting today of Trump and Russian President Vladimir Putin.

Rosenstein’s many questionable actions, including his timing of the announcement of indictments, is causing some House Republicans to begin an effort to bring impeachment proceedings against Rosenstein.

The effort is being led by Reps Mark Meadows (R-NC) and Jim Jordan (R-OH). Many thought that Trump was going to fire Rosenstein back in April and have wondered since then why he hasn’t, but Meadows and Jordan are tired of waiting for Trump to act and appear to be ready to take action themselves against Rosenstein in the form of an impeachment.

The question now is, will they be able to win enough support within the House to make an impeachment effort successful and if so, what are chances the Senate will vote to convict Rosenstein???