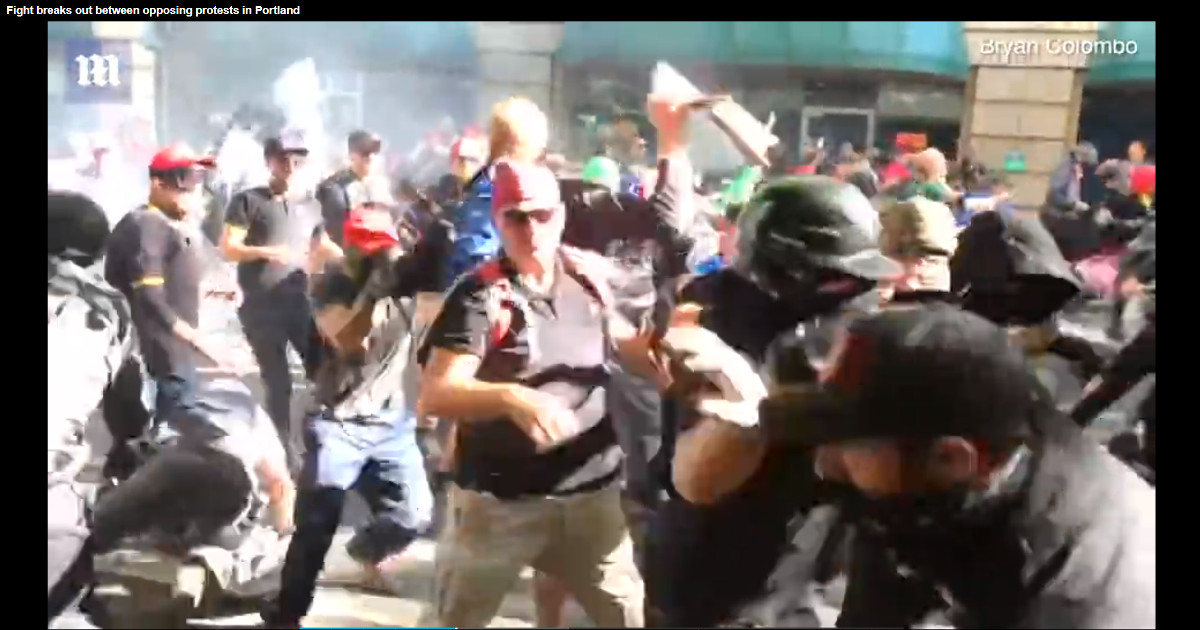 Democrats are quick to condemn any violence except when it suits their purpose and it seems that whenever leftist Democrats resort to violence, that it’s suddenly acceptable as seen this past weekend in Portland.

A Patriot Prayer march was being held. The peaceful event was being help by a right-wing group. Then suddenly, all hell broke loose with the explosion of a flash-bang grenade. These grenades are designed to disorient the target with a sudden bright flash of light and loud boom.

The leftist group known as Antifa, used the flash-bang to not only disrupt the Patriot Prayer march, but to also signal their violent attack of the peaceful march.

(Daily Mail) – This is the moment a flash-bang grenade appears to go off amid a Patriot Prayer march in Portland, seconds before a melee between the right-wing group and Antifa.

Four people were arrested amid the violence on Saturday, which broke out when the pro-Trump group’s scheduled march encountered an opposing group associated with a second nearby rally.

Neither rally was directly related to President Donald Trump‘s immigration policy, which drew peaceful protests elsewhere in Portland and across the country on Saturday.

Police said four people were transported to area hospitals by ambulance, three with non serious injuries and one with a serious but non-life threatening injury. One police officer also suffered what was believed to be a non-serious and non-life-threatening injury as a result of being struck by a projectile…

Note that this is the same left-wing violent group that attacked a peaceful rally by white supremacists in Charlottesville last year, which the media and Democrats blamed on the white supremacists instead of Antifa, who started the violence. Isn’t like the anti-American media and Democrats to blame the peaceful groups for the actions of the violence of their own side of the political issue.