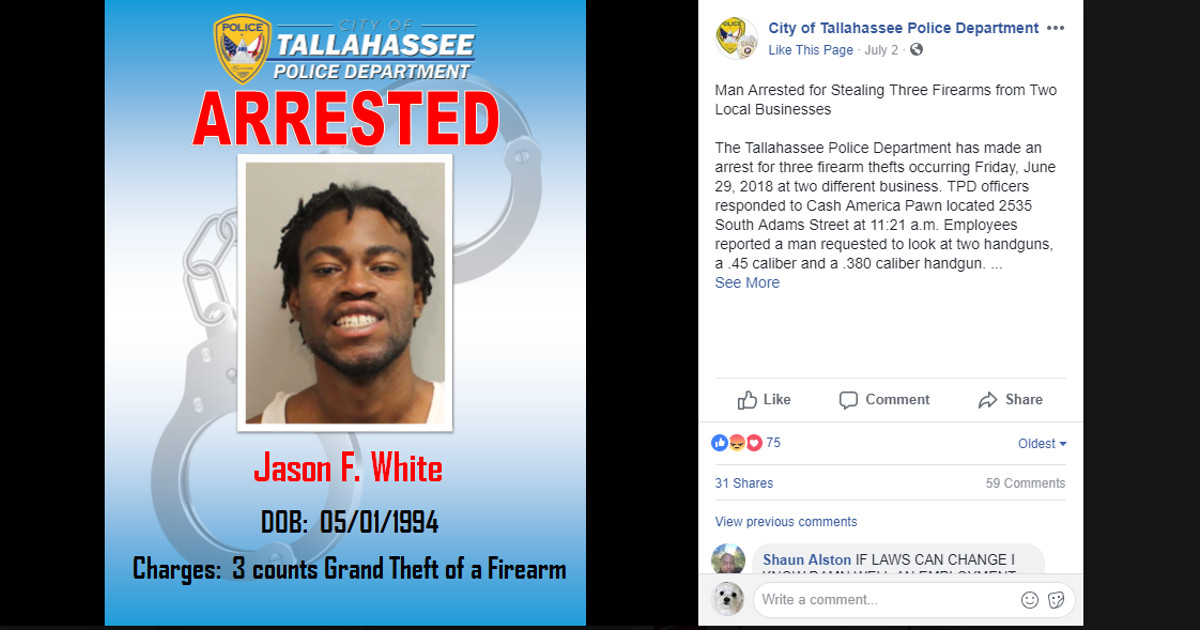 Yesterday, I wrote about Jason White, who walked into an Academy Sports store in Florida and then tried to get away with a handgun, ammunition and backpack. When an employee shouted to stop the man, assistant store manager Dean Crouch stopped White and manage to detain him until police arrived.

Crouch did a great job according to police, but not according to Academy Sports who first suspended Crouch and then fired him for violating company policy, forbidding employees from touching customers. The company would prefer to allow someone to steal a gun and ammunition with which he or she could injure or kill anyone else, rather than face a lawsuit because their employee was a hero.

It was also revealed that White had stolen two guns from a pawn shop earlier the same day. After being detained by Crouch tackling him as White was trying to run out of the store, White was arrested for 3 counts of grand theft firearms along with other crimes. While in police custody, White freely told the police officers that he stole the gun, ammunition, extra magazines and backpack because he wanted to kill someone.

Tallahassee Police Officer R. Hunkiar wrote in his report on the arrest:

Knowing the seriousness of the charges against White and his open declaration of intending to steal again and to kill someone, Leon County Court Group 2 Judge J. Layne Smith set White’s bail at $5,000. Common practice of most courts throughout America is that all someone has to do is pay 10% of the bail amount to a bondsman and they walk out of jail. Guess what. White paid the 10% ($500) and walked out of jail.

No one knows who White intends to kill only that he openly told police he will steal a gun again and he will kill that person, making anyone with a sane mind ask how could Judge Smith set such a low bail, first for the seriousness of the crimes and secondly, after the open admission of his intensions?

This is one of the reasons America has such a crime problem. Our slap on the wrist judicial system along with criminals often having more rights than their victims, what is there to stop people from committing a crime?

I recall talking to a career criminal who told me that in many instances, a first offense for robbery or similar type crime is time-served and probation. If one is sentenced to 10 years in prison, they can generally get out in only 2 ½ to 4 years. He had been sentenced to 25 years in prison and was released on parole after serving just less than 7 years behind bars. He admitted that the system is not a deterrent to most criminals.

I wonder if the family of whomever White murders would be able to file a wrongful death lawsuit against Judge Smith for allowing White to walk free with such a small bail, knowing his crimes and intentions?