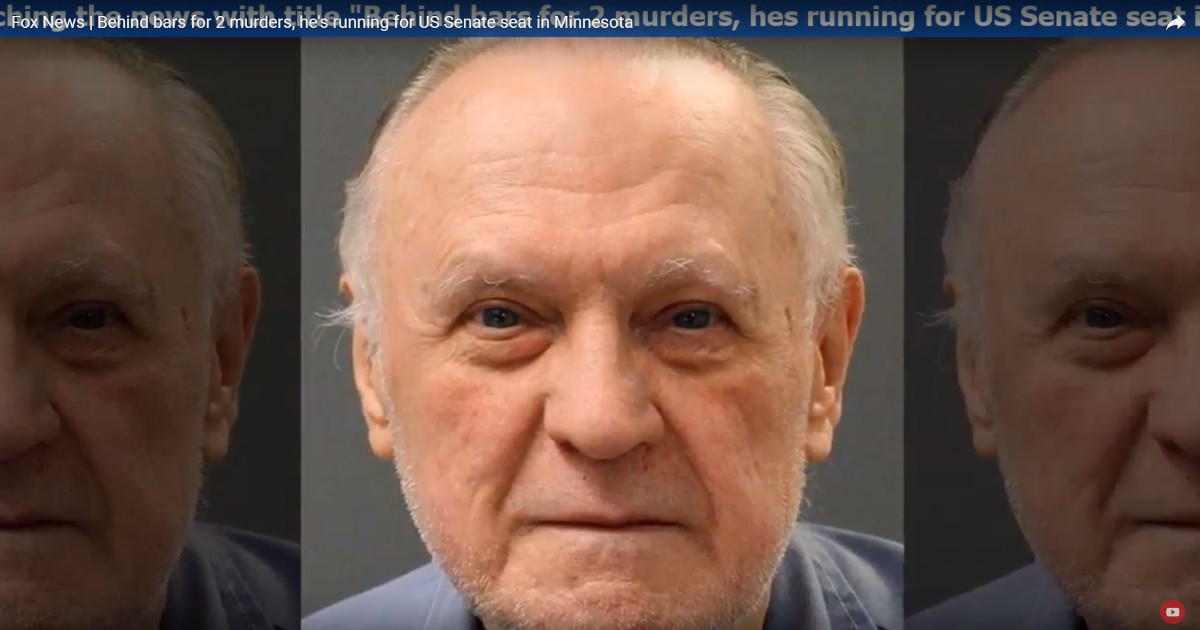 What does someone do to get out of prison if they have been convicted of two murders and given a life sentence without the possibility of parole?

Many states have laws preventing convicted felons from running for or holding public office, which is a good thing, but some states’ laws are lacking completeness, as in Minnesota. State law prohibits a felon from running for public office at the state level, but not at the federal level and thus the loophole that 75-year-old Leonard Richards is using to launch a campaign for the Senate seat currently held by Sen. Amy Klobuchar (D-MN).

Klobuchar has held the Senate seat from Minnesota since January 2007. Prior to that, she served as the County Attorney for Hennepin County, the most populous county in the state with Minneapolis as the county seat.

Yes, Richards is running as a Democrat, or should I say as a candidate from the Democratic -Farmer-Labor (DFL) Party. The DFL is Minnesota’s version of the Democratic Party, but just the name speaks on the influence of socialism within the party. Minnesota is holding their primary election on August 14, and no one seriously thinks that Richards has any chance of upsetting Klobuchar, but the very fact he is running should be upsetting and concerning to many voters.

Richards was convicted of murdering his half-sister May Wilson in 1982 and then five years later, he shot and killed his attorney, Robert Stratton. Many believe that Richards should have been sentenced to death for the murders, but Minnesota eliminated the death penalty in 1911.

In 1905, William Williams murdered two people and was sentenced to death. In 1906, Williams was hung, but the rope was too long and he hit the floor. Several police officers present at the execution lifted Williams up and held him until he eventually died of strangulation from the rope around his neck. The news of the botched execution made big news throughout the state and in 1911, the death penalty was abolished in Minnesota and it has never been reinstated. Had it been reinstated, Richards would have been a likely candidate and if that were so, he may not have been around to make such a farce of America’s electoral system.

When some questioned Richards’ legal ability to file to run for the US Senate, a legal adviser for the state’s Secretary of State office told the media that courts have ruled that convicted felons, including those still in prison, cannot be barred from filing the necessary paperwork to run for political office.

When I said that no one believes Richards has a chance winning, that may have been more hope than fact. In 1992, Richards ran for a seat in the US House and received 14,500 votes. He ran again in 1994 and received 4.000 votes.

The way so much of America has turned to liberalism and socialism and how so many Democrats are willing to restore the lost rights to convicted felons (the right to vote, but NOT the right to own or possess a firearm), there is no telling how many votes he may receive.

If, by some wild reason, Richards does defeat Klobuchar in the primary and manage to win the Senate seat in November, would he be allowed out of prison to go to Washington DC to serve as a US Senator? According to one source, the answer is no, but there is no telling with so many liberal judges in place who were appointed by Barack Obama.

The very fact that a convicted murderer is allowed to run for the US Senate is an insult to the people of Minnesota. Hopefully, the state will revise their laws to include banning convicted felons from running for federal office. It’s also a warning to other states to check out their own laws and make sure they take measures to keep convicted felons where they belong – in jail.