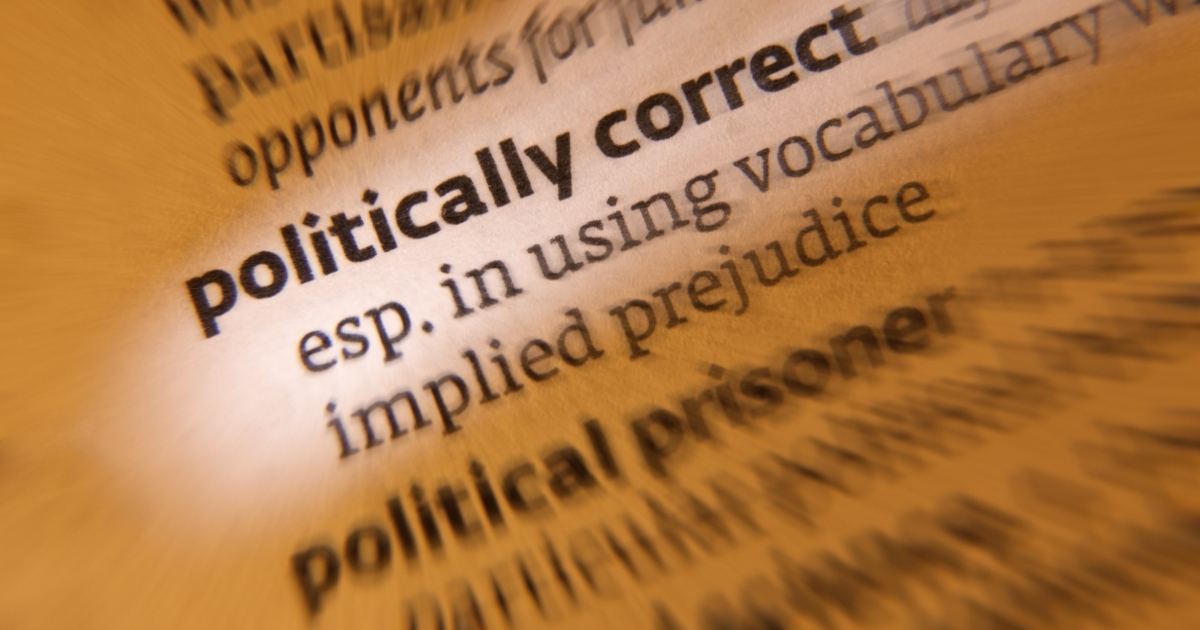 According to Dictionary.com, political correctness is defined as:

“marked by or adhering to a typically progressive orthodoxy on issues involving especially ethnicity, gender, sexual orientation, or ecology”

Wikipedia (a site that is not always trustworthy) defines political correctness as:

“The term political correctness (adjectivally: politically correct; commonly abbreviated to PC or P.C.) is used to describe language, policies, or measures that are intended to avoid offense or disadvantage to members of particular groups in society. Since the late 1980s, the term has come to refer to avoiding language or behavior that can be seen as excluding, marginalizing, or insulting groups of people considered disadvantaged or discriminated against, especially groups defined by sex or race. In public discourse and the media, it is generally used as a pejorative, implying that these policies are excessive.”

Some of the politically correct terms that irritate me include African American, Native American, undocumented immigrants and social justice. I have friends who came here from South Africa and they are white and are offended by the term African American to refer to blacks as they are African American and not black. As for Native American to refer to an American Indian let me ask you this – were you born here in the United States? If so, then you are a native American. I’m a native American and don’t have trace of Indian DNA in me. And social justice – the term actually means socialism and was coined to sell Americans on the principles of socialism. Like changing socialism to social justice so the American people will better accept it, Democrats changed illegal alien to undocumented immigrants to make them sound more acceptable. The bottom line is they are in the US illegally and they are aliens from other countries which makes them illegal aliens.

The majority of the American people are getting fed up with political correctness as revealed by a recent poll:

“A nationwide poll shows that an overwhelming majority of Americans believe that the political correctness in the United States has ‘gone too far,’ and the National Football League’s PC policies are credited with sacking its fan base…”

“‘And voters see fallout – nearly half (46 percent), think political or business leaders ‘frequently’ make bad decisions because they are worried about being politically correct, and another 34 percent feel it happens ‘sometimes,’ Fox News’ Victoria Balara reported.”

Have you ever wondered what’s really behind political correctness? Consider this:

“Somewhat grimly, in the 1920s the Soviet Communist Party began using the concept of political correctness to enforce strict adherence to the party line in all aspects of life. It you were unfortunate enough to be deemed politically incorrect, you were likely to be exiled to a gulag, or worse.”

“Today the term politically correct (and its abbreviation PC), more often than not, refers specifically to the language that surrounds controversial or hot-button issues. Liberals have used the negative construction not politically correct to draw attention to words, phrases, or statements that they felt were socially unacceptable or insensitive. The conservative response to this has been to question and generally reject the notion of political correctness, arguing that it too often entails ‘the policing of language’.”

Yep, it comes from communism and its intention is to control what people say and think. A number of sources report that communism leads to socialism and it’s today’s socialists who call themselves Democrats, who are the ones pushing political correctness as their way of policing the language and brainwashing the American people in the process.

Since I am not a liberal, communist nor am I a socialist, I refuse to use politically correct terms in my writings nor in my everyday speech. I make no apologies for not being politically correct. I prefer to tell the truth, plain and simple and not try to hide things with nonsense terms.