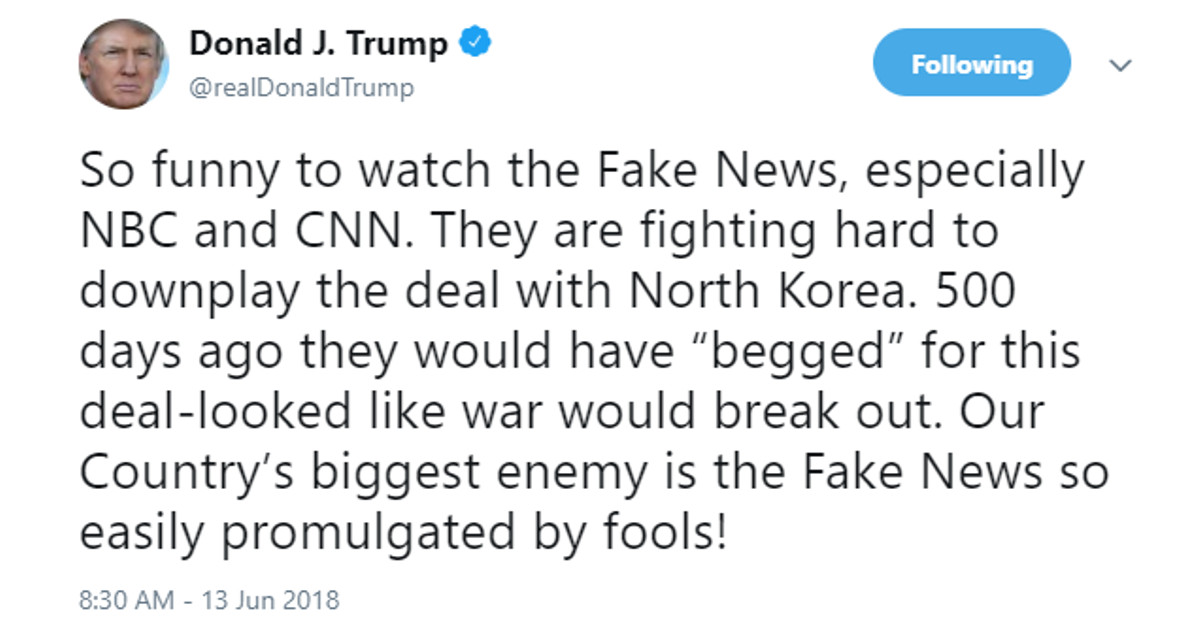 President Donald Trump just returned from his historic meeting in Singapore with Kim Jong-un of North Korea. A year ago, many considered North Korea to be America’s number one enemy and many feared we were headed to a war with North Korea that could well end up starting a third world war. Upon his return, it was clear that North Korea was no longer our number one enemy, but then who is? Russia? Iran?

In his usual manner of speaking out publicly, Trump again turned to Twitter where he tweeted that fake news, naming NBC and CNN, was now America’s number one enemy that is ‘promulgated’ by fools.

(Constitution.com) – The story of the year so far is undoubtedly President Donald Trump’s handling of the North Korean crisis, and the complete capitulation of Kim Jong Un after 60 years of dynastic, despotic rule.

We went from “fire and fury” to friendly handshakes over the course of less than a year, with both leaders having made serious threats of annihilation to each other’s nations over the course of several rounds of verbal warfare.  Somewhere along the line, something flipped Kim, who was quick to arrive at the negotiating table in Singapore this week.

Signing what amounted to a peace treaty, Trump and Kim made several public appearances together throughout the summit, much to the nonchalance of the mainstream media who routinely attempted to either downplay or degrade the import of the historically significant moment.

The question is, will Trump or Congress take any action against those media outlets that have been flooding the news with their fake stories. At one time, Trump hinted that they could lose their FCC licenses because of the fake news, but it’s questionable if that would be legal or not, but if, imagine what would happen if they did lose their FCC licenses.