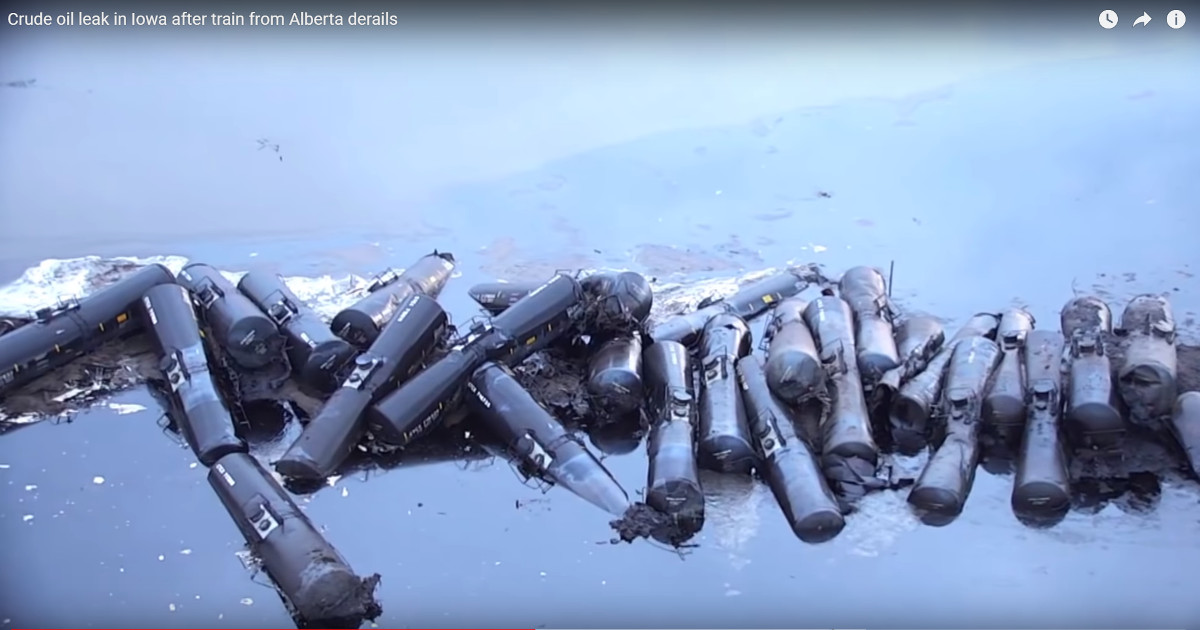 Back in 2014, Barack Obama and his fellow minions were adamantly opposed to the oil pipeline project that would have created between 10,000 to 50,000 jobs and helped America take a huge step towards being self-sufficient in supplying our own energy needs.

Obama and other Democrats argued that the Keystone XL Pipeline presented the potential for leakage and environmental pollution. Democrats even spurred local residents and American Indian tribes along the pipeline route to protest the possible danger if a leak happened.

But the threat of an environmental crisis was NOT why Obama and Democrats were so adamantly opposed to the Keystone XL Pipeline. What was (or is) the real reason for the opposition to the pipeline?

Warren Buffett – one of Obama’s and Democrats largest financial supporters. As I wrote back in 2014:

“Currently, Canadian crude oil is transported from Canada to the Texas refineries via the Burlington Northern Santa Fe Railroad (BNSF). This railroad is the second largest freight railroad in North America and a very large part of their business is the transportation of the Canadian oil.”

“In 2010, BNSF shareholders voted to accept an offer from Berkshire Hathaway to purchase the remaining 77.4% of the company’s stock that they didn’t already own. Berkshire Hathaway is owned by Warren Buffett who is one of the wealthiest men in America and the world.”

“BNSF Railroad makes about $30 for every barrel of Canadian crude oil they transport to the Texas refineries for an annual income of around $2 billion. If the Keystone XL Pipeline was approved and completed, it is estimated that it would cost only about $10 per barrel to transport the crude oil from Canada to Texas. If that happened, Buffett’s railroad stands to lose nearly $2 billion of annual revenue.”

One of the arguments used by Obama and Democrats claimed that shipping crude oil via the railroad was much safer for the environment than the POSSIBILITY of a leak in a pipeline.

So, how safe is transporting crude oil via the railroad?

This past Friday, a train with 33 cars loaded with crude oil derailed, spilling oil into the Rock River in Iowa. Not all of the tanker cars were leaking, but enough oil was leaked into the Rock River to warrant the evacuation of several communities downstream from the spillage.

Guess what railroad this was? According to a source:

“The train derailed at about 4:30 a.m. Friday, said Andy Williams, a spokesperson for BNSF Railway Co. There were no injuries, he said. Lyon County Sheriff Stewart Vander Stoep said not all of the cars were leaking, but a significant number of them were.”

“Williams said BNSF crews, a hazardous materials squad and cleaning crews were all at work near the tracks south of Doon and north of Rock Valley. Vander Stoep said the derailment was likely connected to the flood, but it was still unclear late Friday what caused the accident.”

“‘We don’t know how much is leaking or how bad it is,’ Vander Stoep said. ‘We’ve got some stuff out on the water now to soak it up, but the whole area is blocked off’.” [Emphasis mine]

So, is this an isolated incident involving a train caused oil spill? Check this out:

“When 14 tanker cars derailed and exploded Monday near tiny Mount Carbon, W.V., neighbors likened the fireball to a scene from the apocalypse. It was ‘like something Biblical, or wrath-of-God type stuff,’ one resident said.”

“In fact, the oil spill and fire on the banks of the Kanawha River was the latest occurrence of a type of accident that U.S. officials say is becoming distressingly common. Federal agencies are documenting a dramatic rise in the number of rail mishaps involving oil tankers in the last three years, as North American producers scramble to find ways to transport surging oil output to markets.” [Emphasis mine]

As you can see, oil spills caused by railroads are far more common than Democrats want you to know. This proves that their real objections to the Keystone XL Pipeline had nothing to do with the threat of environmental damage due to a leak in the pipeline and had everything to do with their war on oil and coal, regardless of the negative impact on America and the American people.