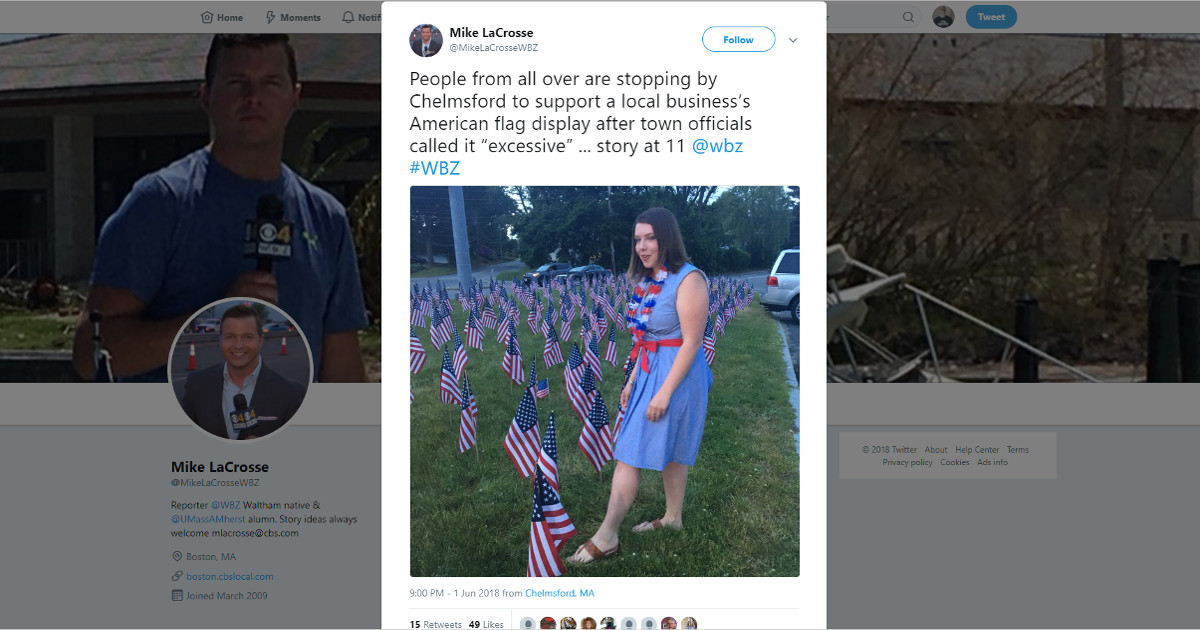 The question being asked in Chelmsford, Massachusetts is how many American flags is excessive? A realtor and his 11-year-old daughter placed 200 small American flags in the front lawn of the realty for Memorial Day. He later received a notice from the city, stating that his display violates a city ordinance of excessive flags.

The realtor was incensed and said he and his daughter were being patriotic and trying to honor our troops and veterans. So, in response to the town’s notice of excessive flags, he added another 200 small American flags to the display on the front lawn of the realty office.

(The Western Journal) – A Massachusetts town threw the book at a company’s display of American flags only to be met with defiance by the patriotic scofflaws who have since doubled the number of flags planted on the front lawn of the real estate firm’s offices.

“Can you have an excessive amount of American flags?” real estate broker Jon Crandall told the Lowell Sun.

Crandall said that he and his 11-year-old daughter showed up on the Saturday of Memorial Day weekend to put 200 small American flags in the front lawn of Laer Realty in Chelmsford.

“Two hundred certainly doesn’t seem excessive to me,” Crandall said, according to WFXT.

“She was amazed, ‘Dad, we did all that in a half an hour,’ it was amazing. A little tiny thing meant so much,” Crandall said…

Crandall said the flags speak for themselves and that he hopes to avoid a fight with city hall, and he’s getting lots of support from people in town and from out of town. They are driving in from other cities just to show their support to Crandall and his flag display. I suspect if the city tries to go after Crandall and his display of American flags.