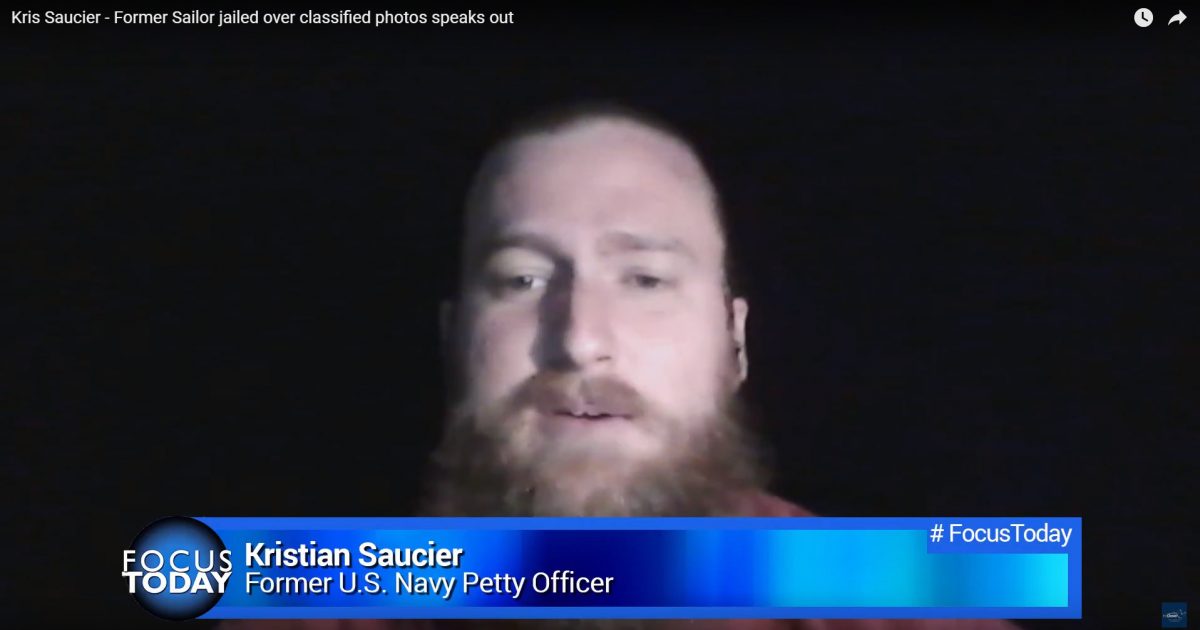 In September 2007, US Navy Petty Officer Kristian Saucier was assigned as a machinist mate on board USS Alexandria, a US Navy nuclear powered submarine. He served on board the submarine through 2012.

In 2009, Saucier took photos inside the submarine, including photos with his cell phone of classified areas like the nuclear reactor core. In March 2012, Saucier set his cell phone on top of some trash in a dumpster at the Hampton-Scotland Transfer Station, Hampton, Connecticut. When the USS Alexandria was docked at the Naval Submarine Base New London, in Groton, Connecticut, Saucier regularly took discarded demolition waste to the waste station at Hampton-Scotland Transfer Station, about 40 miles away.

The supervisor of the waste station found the cell phone, believing that someone had discarded it, so he decided to keep it to use for his personal use. When he discovered that the cell phone had photos of the insides of a submarine, he alerted authorities, prompting the FBI and the Naval Criminal Investigative Service (NCIS) to get involved. After they interviewed Saucier, he got spooked, returned to his apartment, where he destroyed a laptop computer, camera and SD card. He placed them in a trash bag and placed the bag in a box which he left in the basement of the apartment. Family members said they eventually found pieces of the broken and smashed laptop in the woods near family owned property in Connecticut.

Saucier was arrested and charges unauthorized retention of defense information and obstruction of justice. At the time, the two charges together carried a fine up to $500,000 and a maximum of 30 years in prison.

During his defense trail, Saucier claimed he had no intention of ever sharing the photos and then tried to use a Hillary Clinton defense. This defense was based upon Hillary Clinton’s email scandal where she used her private email server to send and receive classified and confidential State Department information, which, according to federal law, was illegal. However, thanks to Barack Obama, James Comey and the Department of Justice, Hillary got off without facing any criminal charges.

The judge in Saucier’s trial believed him, in that he had no intention of sharing the photos, but did not accept Saucier’s Hillary Clinton defense. Yet, in May 2016, Saucier plead guilty to one count of unauthorized retention of national defense information (the photos from inside the submarine). He was sentenced to 1 year in prison and a $100 fine.

During Trump’s presidential campaign in 2016, he spoke about Saucier and how he was treated by the Obama administration compared to how Hillary Clinton was dealt with, saying it was a totally biased and unfair system.

After Saucier had served his year in prison, he was free, but still a convicted felon. In March 2018, President Donald Trump issued a full pardon to Saucier. During the announcement of the pardon, White House Press Secretary Sarah Sanders Huckabee stated:

“Mr. Saucier was 22 years old at the time of his offenses and has served out his 12-month sentence. He has been recognized by his fellow service members for his dedication, skill and patriotic spirit,”

“The president is appreciative of Mr. Saucier’s service to the country.”

In a recent announcement by his attorney, Ronald Daigle, it was learned that Saucier is filing a federal lawsuit against Barack Obama, former FBI Director James Comey, the Department of Justice and several others, due to the difference in the way they handled his case and that of Hillary Clinton.

“They interpreted the law in my case to say it was criminal, but they didn’t prosecute Hillary Clinton. Hillary is still walking free. Two guys on my ship did the same thing and weren’t treated as criminals. We want them to correct the wrong.”

“We’ll highlight the differences in the way Hillary Clinton was prosecuted and how my client was prosecuted. We’re seeking to cast a light on this to show that there’s a two-tier justice system and we want it to be corrected.”

It will be interesting to follow to see what happens. Either Saucier was discriminated against or Clinton should be charged and tried for her crimes. Many in America are hoping for the latter as they would love to see Hillary Clinton in prison.