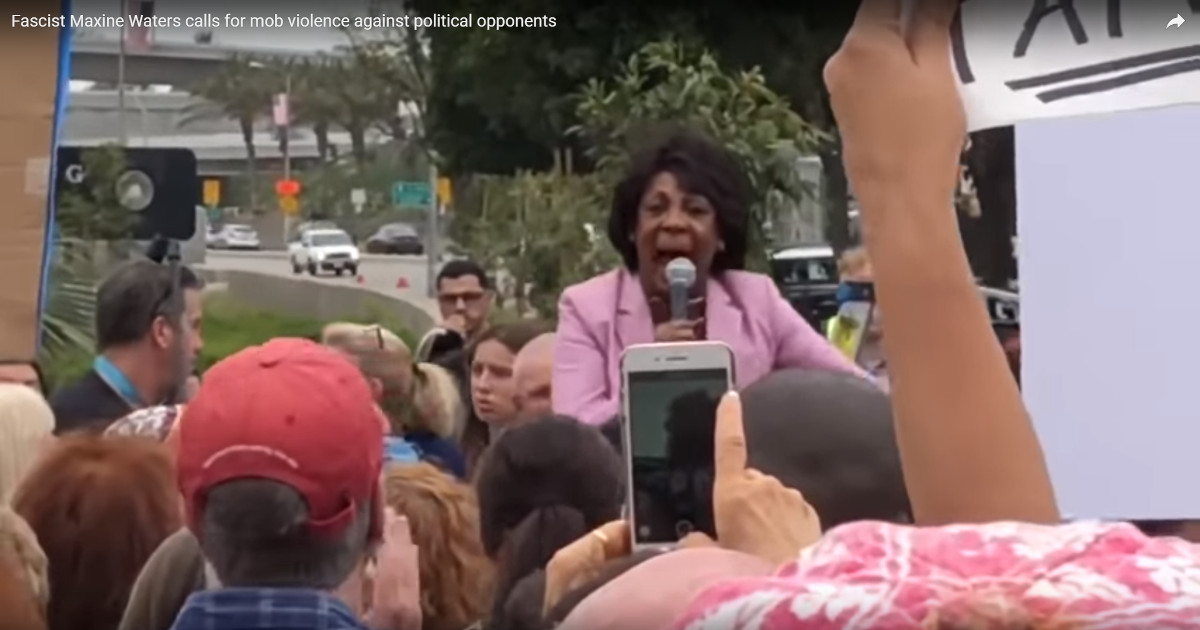 Is there a difference between senile dementia or hatred induced delusion? I guess there is a difference based on the cause, but the outcome is the same and can be easily summed up or described as Rep. Maxine Waters.

Born in St. Louis in 1938, Waters in the fifth of thirteen children. In 1961, Waters’ family moved to Los Angeles where the recent high school graduate took jobs in a garment factory and as a telephone operator and eventually became an assistant teacher in the Head Start program in the area of Los Angeles known as Watts. Eventually, Waters obtained a degree in sociology from California State University at Los Angeles.

In 1976, Waters was elected to the California State Assembly and held that position until she won election to the US House in the 1990 election. She has held her House position, representing California’s 43rd congressional district, which consists of part of Los Angeles, Torrance and Carson and all of the town of Gardena, Hawthorne, Inglewood, Lawndale and Lomita. The majority of voters in this district are Hispanic along with a substantial number of black Americans.

Waters can best be described as a radical racial activist who fully supports the socialist agenda of Barack Obama and the Democratic Party. That description is based upon her actions and her words.

During the Bill Clinton administration, Clinton ordered the mortgage industry to create mortgages to put more American families in homes and they did. That creative mortgage program is what led to the huge recession that nearly destroyed America’s economy during the latter parts of George HW Bush’s presidency. Those families found that after 3-5 years, they couldn’t afford the increased payments on their homes. This led to the collapse of the housing market which took most of America with it.

As Fannie Mae was experiencing serious trouble with foreclosures and bankruptcies, Waters went public saying there was nothing wrong with Fannie Mae.

In 2008, She had the gall to tell executives of the oil industry that the US government was going to take control of their companies.

Earlier this year when President Trump gave his State of the Union Address, Waters offered a rebuttal on BET, where she condemned Trump for some of the exact same practices that she had defended Obama for doing. Those things were okay for Obama but not for Trump, displaying her racist hatred of Trump.

In May 2018, Waters declared that the US was in a constitutional crisis because Trump was not acting presidential. She also accused him of not respecting the US Constitution, although Trump has stood up for the Constitution a lot more than Obama did. She praised Obama for trampling all over the Constitution.

Earlier this month, she again accused Trump of colluding with Russia to influence the election even though there is no evidence found after a year of the Mueller investigation to support the claim. She ignores the mountain of evidence of collusion between various Democrats and Russia.

In her latest public stunt, Waters took to a megaphone to emotionally stir up a crowd in Washington DC. Like many liberals, she used her megaphone to amplify her shouting and screaming, a ploy many liberals use to get a reaction from people. This time, she accused Trump of ‘sacrificing our children’ in reference to the children of illegal aliens who have been detained. It doesn’t matter that Trump signed the executive order to stop the separation process and that the government is giving illegals preferential treatment over American citizens who are also separated from their kids when they commit a crime. She also ignored the fact that the same thing happened under Obama and the same facilities and cages were used under Obama as were being used today under Trump.

However, Waters went overboard when she not only called for protesters to harass every member of Trump’s people, but she also claimed that they were doing the right thing because God was on her side:

“History will record while he tried to step on all of us, we kicked him in his rear and step on him.”

“If you think we’re rallying now, you ain’t seen nothin’ yet.”

“And guess what, we’re going to win this battle because while you try and quote the Bible, Jeff Sessions and others, you really don’t know the Bible.”

“And so, let’s stay the course. Let’s make sure we show up wherever we have to show up and if you see anybody from that Cabinet in a restaurant, in a department store, at a gasoline station, you get out and you create a crowd and you push back on them, and you tell them they’re not welcome anymore, anywhere.”

If she thinks this type of action is pleasing to God, then Waters has NO concept of what the Bible really says. She is biblically delusional, among other forms of delusion. Maybe this is why she only drew a crowd of about a dozen people at a rally earlier this month, when she expected hundreds.

To be honest, it’s time that Waters and Pelosi get on their brooms and fly back to California and stay there where they can sit in their rocking chairs and watch their cauldrons bubble of boil.