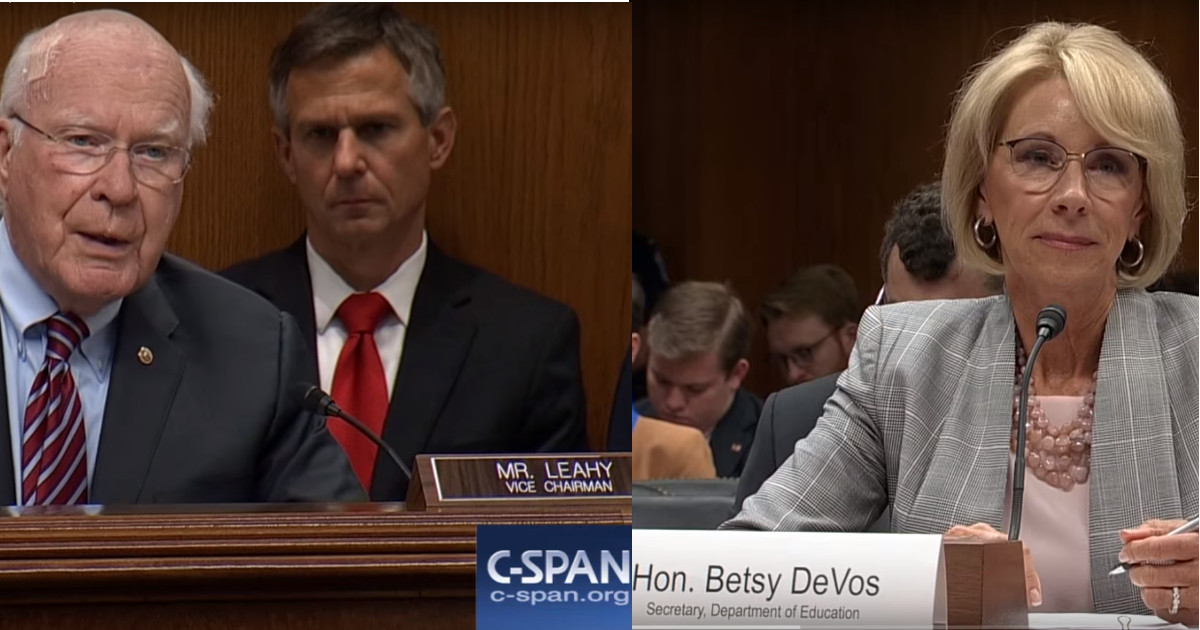 Yesterday, the mainstream media was in shock and horrified over the response Education Secretary Betsy DeVos gave in response to a question during a congressional hearing. DeVos is heading up President Trump’s Federal Commission on School Safety.

She was asked about the role of guns in school violence and stunned them by saying that guns were not part of the charge given to the commission.

Leahy has been in the Senate since 1975 and is an outspoken critic against President Trump. He is typical socialist Democrat, supporting most of their agenda items including abortion rights, unfair biased based upon race (Affirmative Action), no death penalty, raising taxes, climate change, cap and trade and gun control.

Leahy: Let me ask, go into another area. You are the Chair of the President’s School Safety Commission that was formed after the school shooting in Florida that left 17 students and educators dead. Our country is now averaging a school shooting each week. That one day after the commission met last month, another 10 students and teachers were killed in Santa Fe, Texas. I understand your commission intends to release its recommendations by the end of the year. Will your commission look at the roll of firearms, as it relates to gun violence in our schools?

DeVos: Thanks Senator for that question and it is an honor to serve and lead this commission. We are focused on the twenty-some different provisions (interrupted by Leahy).

Leahy: I know. I understand there’s a lot, but, I’m also thinking the chairman has difficulties, I’m trying to give you a question that can be answered yes or no. Will your commission look at the role of firearms as it relates to gun violence in our schools?

DeVos: That is not part of the commission’s charge per se.

Leahy: I see. So, you, um, so you’re studying gun violence but your not considering the role of guns.

DeVos: We’re actually studying how we can insure our students are safe at school.

Leahy: Uh, you’re studying things like how much time is spend on video games, but you go to a lot of other countries where they spend just as much time, but have only a tiny fraction of the shootings that we do. The gun choice for mass shooters is an AR-15. Do you believe an 18-year-old high school student should be able to walk into a store and minutes later come out with an AR-15 style gun and hundreds of rounds of ammunition?

DeVos: Well sir, I know that this body and your counterparts on the other side of the capital have addressed a number of these issues, and I know that you’re going to continue to debate and discuss them (interrupted by Leahy).

Leahy: I’m trying to give you questions that you can answer yes or no, so let me repeat it in case I wasn’t clear. Do you believe an 18-year-old high school student should be able to walk into a store and minutes later come out with an AR-15 style assault weapon and hundreds of rounds of ammunition?

DeVos: I believe that’s very much a matter for debate, and I know that’s been debated within this body and will continue to be. Our focus is on raising up successful proven techniques and approaches to insuring schools are safe for students to attend (interrupted by Leahy).

Leahy: Are you looking at those other countries where the students spend just as much time on social media and video games, everything else but have much lower gun violence in their schools?

DeVos: We had a very important meeting last week in Maryland at a school within a district that has employed an approach called PBIS for 16 or 18 years that deals with (interrupted by Leahy).

DeVos: Not per se.

Leahy: So, we’ll okay, gun violence in schools but not look at guns is an interesting concept

Note that Leahy is totally focused on guns and gun control. He seems to be unable to comprehend that gun violence is still a symptom of a morally sick society. He also refuses to understand that the purpose of the commission is NOT gun control but what can be done to make schools safer.

I hope that DeVos and her commission look at what Texas Governor Greg Abbott is doing to improve school safety. He wants more teachers and faculty trained and armed along with putting more armed security (veterans and retired law enforcement), reduce the number of entrances and exits to every school building and institute a distinctly separate sounding active shooter alarm system. Basically, Abbott wants to make it harder for a shooter to enter a school building and then he wants more trained and armed personnel inside the schools to be ready to confront an active shooter instantly and not wait for police to show up. A concept Leahy and Democrats refuse to understand or accept.