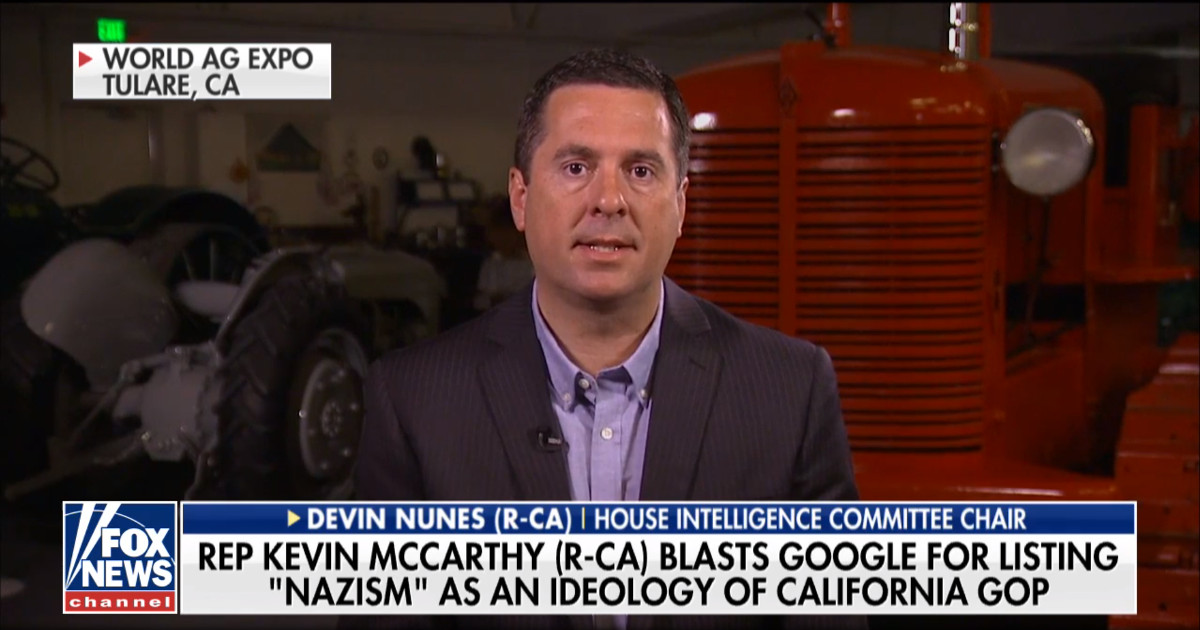 Google’s headquarters are located in Mountain View, California, about 7 miles northwest of San Jose and bordering on the southeast edge of Palo Alto. Recently, Google listed Nazism as being one of the political ideologies of the California Republican Party. It created an instant backlash against Google, including drawing the ire of Rep. Devin Nunes (R-CA) who chairs the House Intelligence Committee.

Nunes has received a lot of complaints over the past couple of years concerning the anti-conservative bias of Google as well as Facebook and other tech companies. After the Nazism incident, Nunes warned that if Google and other tech companies continue the anti-conservative bias that they could face congressional hearings, which could be very damaging to their business.

(Fox News) – Just days after Google inadvertently listed “Nazism” as one of the ideologies of the California Republican party, Rep. Devin Nunes (R.-Calif) warned that the search giant and other tech heavyweights could face hearings over alleged anti-conservative bias.

Speaking during an interview on “Sunday Morning Futures” on Fox Business, the House Intelligence Committee Chairman said that anti-GOP bias is widespread. “I think what the American people need to understand is there is bias against conservatives and Republicans all across this country,” he told Maria Bartiromo. “And now as you see things, it’s always been there with newspapers and television, but now as you see it getting into the internet it’s one of the challenges we have with millennials.”

Google was slammed last week after the “Nazism” listing appeared in the search giant’s Knowledge Panel.

The Knowledge Panel, which accompanies search results, pulls in data from a host of sources across the Web, including Wikipedia. Google scrambled to fix the issue, which it said was the result of “vandalism” on one of its sources…

A congressional hearing or investigation into Google, Facebook and others is long overdue as they have been systematically trampling on the First Amendment rights of millions of their users. They have been trying to silence many conservatives and drive conservative websites and companies out of business by shutting down their accounts or blacklisting them and cutting off a large supply of their revenue.