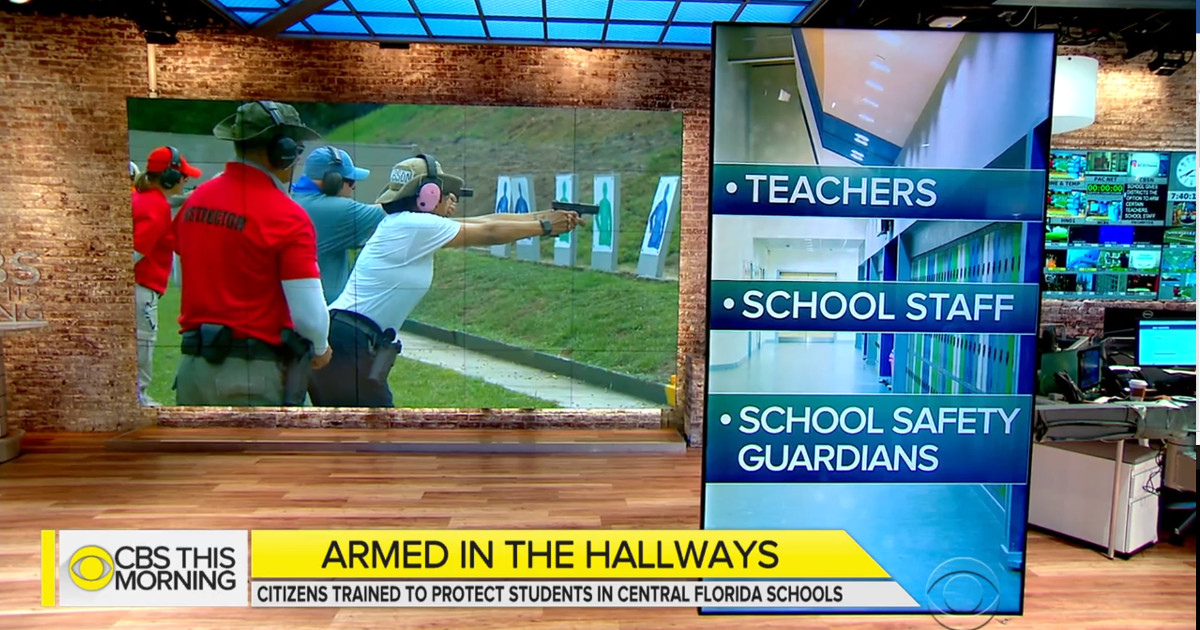 Should teachers or school staff be trained and armed or should guns be banned from school properties altogether? That is a major subject of debate that has come to the forefront after a rash of school shooting in America.

Some states have passed laws, allowing teachers and school staff to undergo special training, obtain a concealed carry permit and then, with the school district’s permission, carry their weapon with them while teaching or working at the school.

Ohio passed such a law several years ago and within the first six months, the authorized training centers were flooded with applicants who wanted to be trained. Over a thousand teachers and staff applied for the limited positions in the training schools, all with the desire to obtain their training, obtain their concealed carry permits and carry their weapon with them while at school. I recall one teacher who was interviewed saying that he not only wanted a way to protect students and stop any active shooter, but he also wanted a means to protect himself.

After the school shooting in Santa Fe, Texas, Gov. Greg Abbott launched a plan to train and arm teachers and staff, as well as provide the means for schools to have more armed resource officers on campuses. He also wanted to restrict the number of entrances and exits to every school building, which would make it more difficult for an active shooter to enter a school building or get away after the rampage. He also called for a unique sounding active shooter alarm in every school that could be activated in the event of an active shooting.

Naturally, anti-gun Democrats have blasted Abbott for his plans to put more armed security on school campuses. They argue that it’s only a matter of time before some teacher accidentally or intentionally shoots a student. In the meantime, they would prefer to leave teachers and students totally unprotected from the next wacko with a gun wanting his or her claim to infamy.

Much to the anger of Democrats in Florida, the state legislature passed a law in response to the shooting at Marjory Stoneman Douglas High School. The law allows school districts to decide if they want to allow teachers, school staff or school safety officers to be trained and armed.

Of course, if you ask no-nothings like student David Hogg, they will say they are all against it, but other students are for it. Did you know that after the school shooting in Santa Fe, Texas, many students, including some that were wounded and their parents, were all for arming teachers and believe that had teachers been trained and armed that it would have saved lives? The mainstream media don’t want to you know about that or hear from them.

A program has been started in Central Florida to train anyone who wants to help protect students. Currently, they are training common people to eventually serve as school safety guardians. Their training is extensive and it is reported that they will have received more training than many law enforcement officers receive.

Among the current trainees is a minister, former teacher and former police officer. The former teacher, Kimberly Hall told the media:

“I’m tired of hearing teachers having to give their lives to protect students. … We’re going to be there to engage. You will not have to. We will run to that threat while you take care of what you need to.”

When asked about the training and him being a minister, Stephen Bolden responded:

“I have three small children in the school system. My wife is a teacher….I want to make sure that those children have the safest, best quality education.”

“I’m human. I have to protect my family as anyone does. And I’m gonna protect life the best way that I can.”

Of course, CBS interviewed parents who admitted that they will be more concerned knowing that there will be armed staff on the school campuses.

However, one parent disagrees. One of the students killed at Marjory Stoneman Douglas High School on Valentine’s Day was Meadow Pollack. Her father, Andrew has been actively involved in the firearm and active shooter training from the very beginning. He told the media:

“These kids are going to be safer for now, from what I accomplished and hopefully the rest of the country is going to see what we did in Polk County and they’re going to lead by example.”

When the concerns of parents and others about having armed personnel on school campuses was shared with the group of trainees, former teacher Kimberly Hall gave the best response to the argument being used to not arm teachers and not allow guns on school grounds, when she said:

“I kindly remind them that guns are already being brought into school and that’s much more dangerous.”

We’ve all heard so many anti-gun people say that it’s not the teachers’ job to carry a gun but to teach. That’s true, but a century or two ago, many teachers in America carried guns to protect students from Indians and outlaws. Today, teachers once again are being forced to deal with a different kind of outlaw and as Hall stated, they are already bringing guns onto school campuses, so the best way to deal with them is to have trained and armed personnel throughout every school, ready to meet any active shooter and to stop the shooting as soon as possible. Waiting for law enforcement only costs lives, not saves them.

Think about this. Don’t many people use some form of armed security to protect their valuables including themselves? What’s more valuable than the lives of your children?